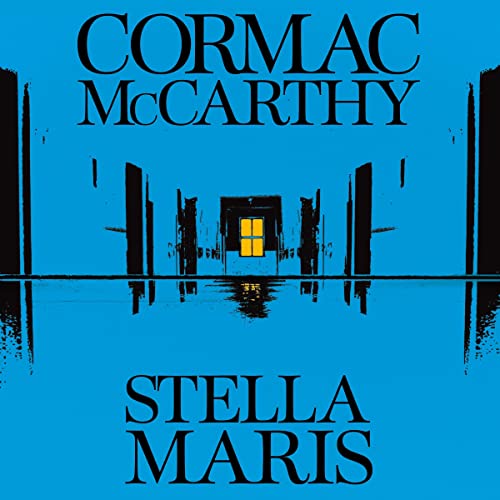 The masterful coda to The Passenger from the Pulitzer Prize–winning author of The Road.

Stella Maris is the story of a mathematician, twenty years old, admitted to the hospital with forty thousand dollars in a plastic bag and one request: She does not want to talk about her brother.

What listeners say about Stella Maris

The end of something.

If this is his final novel then McCarthy has chosen to say goodbye by showing us that there is beauty and wonder, even in the bleakest depths of the human experience. The novel is presented as a series of transcripts and therefore almost entirely a dialogue, between Alicia Western, (whose brother is the central character in McCarthy’s The Passenger), and her psychiatrist. The conversations (perfectly performed by Julia Whelan and Edoardo Ballerini) between the pair range across themes familiar in McCarthy’s work - violence, cruelty, grief, incest, but also explore ideas his characters have rarely ever had a chance to ponder openly - mathematics, quantum physics, linguistics, the mysteries of consciousness, hallucination, dream - with Alicia being revealed as at times dishonest and manipulative and at others, blunt, open and profoundly honest.

I understood the exploration of her lonely existence as McCarthy’s way of painting in micro, the paradox of human experience - the beauty even in the most devastating places that our minds can take us. The longing to be rid of it and the acknowledgment that without it, we are not truly human. At one point there’s a short discussion of the comfort that can be derived in knowing that we can commit suicide, at another of hallucinated “familiars” becoming companions.

I could go on for ever about this novel, I listened to it in one sitting. and will listen many more times.
Like The Road, this is a bleak, unnerving and deeply humane book. Alicia is flawed and often unlikable whilst being deeply sympathetic and ultimately, just like the rest of us, fearful of what it means to exist and and fearful of ceasing to exist also.

A beautiful end to a singular dyptych

My god what a tale. The slender mirrored companion to “The Passenger” delights and confounds with equal measure. Please do listen, McCarthy’s prose has always been at its strongest when it is heard, rather then read.

Jump into a portal of voyage and discovery on a relentless investigation into thought and parameters of being. Such detail and disclosure for a beautiful read. Thank you very much,

Should be performed on the stage. I enjoyed listening to every single minute of book.

Totally saw the oh my goodness part coming, it’s not hard to do the ‘math.’ Will probably re read it down the road but maybe you have to read the passenger first???? Edit- reading the passenger now. Read that first

This is amazingly narrated and the story I will have to continue to unpack for years to come.

what i imagine you might get from asking ChatGPT, "write an intellectual dialogue between a smartass mathematician and her peychologist."

mcCarthy's Passenger and Stella Maris is really about Alicia and we see a much deeper view of her in this book. Ballerini and Whelan do an amazing job together.

A bleak view of the world by an isolated beautiful person. McCarthy’s world is a bleak place. Abrupt ending that left me feeling sad. Great novel.

Narrated interviews between a patient and a psychiatrist make this a tough one to sit through. I found it hard to empathise and even started questioning my commitment to reading and finally listening to all McCarthy’s novels. Perhaps it’ll emerge over time.

I love 'No Country' and 'The Road', so I got The Passenger. it was a bit different but the performances are fantastic. weird, intriguing. so I thought I'd get Stella Maris. just the bizarre ramblings of an annoying crazy genius.as other, better reviews have said, there is 0 plot resolution or even exploration. never read anything like it and didn't like it.

Worse than the first one, There is no story here, only Mcarthy pontificating on philosophy, mathematics and the nature of existence or the lack there of, while perhaps it addresses some interesting topics, it did not contain a plot and was just so full of hubris. I get he is highly intelligent but I prefer a story in my fiction. And again trigger warning - incest, pedophilia, suicide ideation etc. ugh Not my cup of tea.