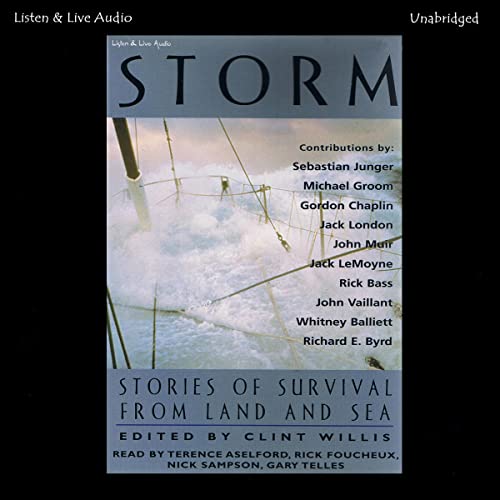 Storm: Stories of Survival from Land and Sea

Most people associate storms and other big weather with death - with the kind of force that makes each of us wonder about life, time, and the nature of our surroundings. Some people go out looking for bad weather or go to places where they're likely to encounter it. Others have the misfortune of being at the wrong place at the wrong time. Still, the stories in Storm have more to say than that. They tell us about what happens when people find that treacherous weather - or when it finds them - and we are reminded of the fragility of life, the capriciousness of nature's will, and how little we can do when both cross paths.

Editor Clint Willis has been a climber and an armchair mountaineer since he was 10 years old. His writing about technology, finance, and the outdoors has appeared in more than 100 publications, including Men's Journal, Outside, Rock & Ice, and The New York Times, and he is a contributing editor of Forbes ASAP and Worth magazines. He lives with his wife and two sons in Cape Elizabeth, Maine.

Nick Sampson, born in Bristol, England, has been an award-winning stage actor for more than 20 years. His theater experience ranges from British farce to Shakespeare.

Gary Telles has been narrating audiobooks for the past 10 years. A veteran stage actor, he has performed classical, contemporary, and original theater across the country in addition to appearing on television, radio, and CD-ROM.

What listeners say about Storm: Stories of Survival from Land and Sea