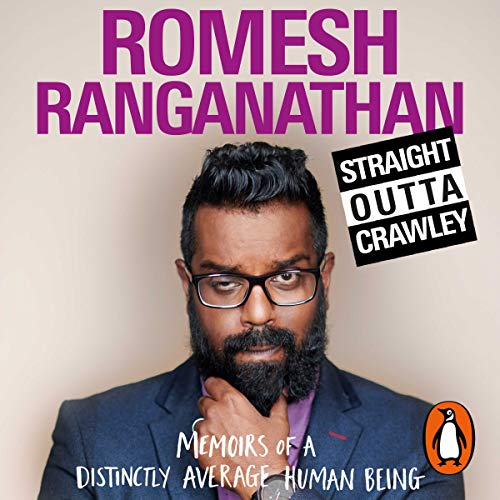 At the age of 9, Romesh Ranganathan delivered his first ever stand-up set at a Pontin's Holiday Camp talent competition, smashing the only other competitor, a young girl playing the kazoo.

The gig went so well that Romesh retired his comic genius for 22 years, hiding behind the guise of a maths teacher, before finally revealing himself again (no, not like that) at the tender age of 31. In 2010, Ranganathan staged his epic comeback gig to an almost silent room and has since gone on to earn his place as the most in-demand overweight vegan Sri Lankan comedian in Britain.

Now, for the first time, he tells the full story of how he got here. From the delights of Sri Lankan hospitality to the race riots of Crawley and the horrors of vegan cheese, this is Ranganathan's hilarious autobiography.

I love his humor and enjoyed his book. He is clearly a funny, clever, sensitive and all round good guy but the book felt like a money spinner, written purely for profit. His narration forced and not easy listening. I wouldn’t buy it as a gift for anyone but I enjoyed it.

If you like Romesh's work then listen to this

Great performance, Romesh is a captivating speaker and excellent story teller. it's like having him perform stand up comedy to you in your home. Would've liked to hear more about his work with other comedians and what they are like.

Romesh’s book is absolutely brilliant. Funny. Moving. Insightful. I’d just assumed he’d walked in to being a stand up star, but he hadn’t. Inspiring stuff. Thanks, Rom!

Bloody loved this book well worth a listen.
I was in fits of laughter which feels wrong when it’s a memoir but I was definitely laughing with Romesh and not at him, Can’t wait till straight outta Crawley 2.

the funniest audio book I have listened to, 5 stars, love this guy he is so funny

The story seems ok so far but it’s spoilt by audio artefacts. I have downloaded the highest quality possible yet I can still hear the edits and strange beeping noise between edits and it’s very off-putting.

The producers need to up the quality of the encoding and/or listen to the actual end result before publishing.

Romesh Ranganathan is funny and enjoyed this book but It just ends so abrubtly it's a shame. Good listen for fans of Romesh though.

This book is fantastic, hilarious and really touching in places, really enjoyed it!! Romesh is so funny and it really translates in this book.

This book, Straight Outta Crawley, is much like Father Ted’s acceptance speech for The Golden Cleric Award : it is a long list of events where Romesh feels he has been ‘dissed’ by anyone, and this was his chance of calling all those individuals ‘pricks’. The book is not without merit, however: there is some very good advice for aspiring comedians; Romesh is disarmingly full of admiration for his long-suffering wife Lisa (who comes out of this very well), and Chapter 7 is killingly funny.

I seem to have a habit of buying autobiographical books by people I like, and after reading what they have written, I don’t like them half as much. This book is no exception, unfortunately. If Romesh ever reads this, he’ll simply say, “Mate, you’re a prick”.

Romesh comes across with a lot self depreciating comedy but he includes you in the story by explaining the situations to you with great comedy timing. Top quality and well paced stories.

An interesting book although I feel the lay out jumped around a bit, however I did enjoy it.

Wish it went on longer. Cant wait for the sequel if there is one. Romesh is hilarious. Someone id love to have a beer with. the book is easy to follow, stories involving laugh out loud moments with the sick and twisted wit any fan of comedy would enjoy.

An interesting insight into Romesh's life; full of funny anecdotes and tangents. Really enjoyed listening to this book while on holiday. Kept me entertained. 10/10 would recommend.