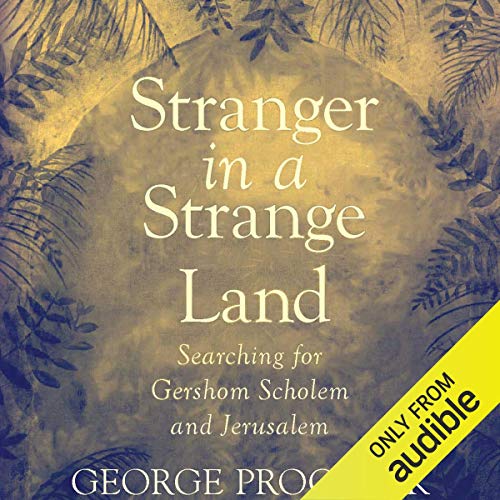 Stranger in a Strange Land

Taking his lead from his subject, Gershom Scholem - the 20th-century thinker who cracked open Jewish theology and history with a radical reading of Kabbalah - Prochnik combines biography and memoir to counter our contemporary political crisis with an original and urgent reimagining of the future of Israel.

In Stranger in a Strange Land, Prochnik revisits the life and work of Gershom Scholem, whose once prominent reputation as a Freud-like interpreter of the inner world of the cosmos has been in eclipse in the United States. He vividly conjures Scholem's upbringing in Berlin and compellingly brings to life Scholem's transformative friendship with Walter Benjamin, the critic and philosopher. In doing so he reveals how Scholem's frustration with the bourgeois ideology of Germany during the First World War led him to discover Judaism, Kabbalah, and finally Zionism as potent counterforces to Europe's suicidal nationalism.

Prochnik's own years in the Holy Land in the 1990s brings him to question the stereotypical intellectual and theological constructs of Jerusalem and to rediscover the city as a physical place rife with the unruliness and fecundity of nature. Prochnik ultimately suggests that a new form of ecological pluralism must now inherit the historically energizing role once played by Kabbalah and Zionism in Jewish thought.

Let's start at the beginning.

Imagine a narrator of a biography of Washington who insists on pronouncing his name as Was Hing ton.

The narrator, whose name must live in infamy, pronounces the name Gershom ( pronounced Gershim, with a real SH like shalom) as Gers- hom. I couldn't believe it. Finally, I just settled in for the story.

I hope that this guy never is allowed to narrate a book again without checking his ability or even interest
in providing accurate pronunciation.

George Prochnik, the author, is very taken with himself and his own rather pedestrian story.

He jumps back and forth from detailing much of the life of Scholem and that of him and his boring
family. Honestly, this is almost pathetic. No one really cares about Prochnik except himself and maybe
two other people in the world.

In addition, he subjects the listener to his brilliant lack of understanding of Scholem and his work.

Prochnik, a convert via a woman rabbi, is astoundingly ignorant of much of Judaism. No surprise here.

He has the nerve to pretend that his observations are to be presented alongside those of the genius
he pretends to describe, Scholem.

Scholem's life is mostly presented here. The story, as it is, is interesting and I definitely learned many things
that I did not know and which help me better to appreciate his life and work.

Amazingly, his most famous book in the West, Major trends in Jewish mysticism, is scarcely mentioned.

Instead, we are informed that his work on Jewish messianism is the really important
contribution of this man.

What arrogance that Prochnik displays in these editorial decisions.

However, if you are willing to pardon the above things you may enjoy the book.

As far as the author, I am grateful to have discovered that I can now avoid anything authored by him.

The story of Gershom Sholem is of tremendous value. He is a towering figure of 20th century Jewish spiritual thought. His contribution is being understood more and more, and I was so grateful for the fully detailed picture of his life.
I was also very engaged with the author's story, and how he wove it into Sholem's narrative.