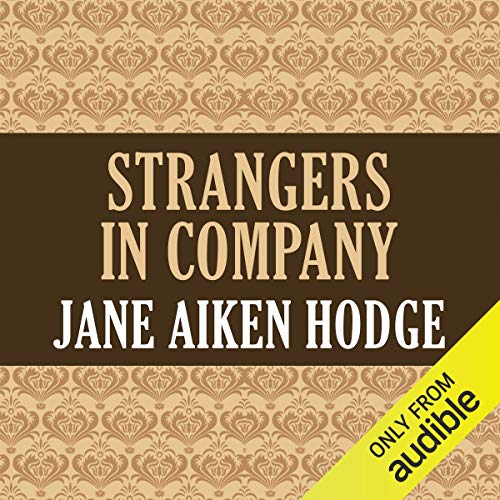 Marian is in her mid-30s and trying to get over the shock of her 18-year-old twins leaving her to live with their father in the USA. As a distraction she takes a job looking after a younger woman, Stella, on a coach tour to Greece. It seems to be the answer to all her worries - financial and otherwise - although there is some mystery surrounding Stella's background.

As the tour gets underway, strange things begin happen, including some serious accidents. People become suspicious, and nobody is at all sure whom they can trust. Marion becomes increasingly worried, both for her own sake and for Stella's, and at the same time tries to resist her increasing attraction to a friendly classics professor who is also on the tour. A suspenseful thriller, tense and concise, that builds interesting characters with ease.

Born near Cambridge, Massachusetts to Pulitzer prize-winning poet Conrad Aiken and his first wife, the writer Jessie McDonald, Jane Hodge was 3 years old when her family moved to Great Britain, settling in Rye, East Sussex, where her younger sister, Joan, who would become a novelist and a children’s writer, was born. Their parents divorced in 1929. From 1935, Jane Hodge read English at Somerville College, Oxford University, and in 1938 she took a second degree in English at Radcliffe College, her mother’s alma mater. She was a civil servant for a time, and also worked for Time magazine, before returning to the UK in 1947. Her works of fiction include historical novels and contemporary detective novels.

In 1972 she renounced her United States citizenship and became a British subject. For many years a believer in the right of people to end their own lives, Hodge chose to end her own by means of an overdose in June 2009. The Times obituary (pub. July 25, 2009) stated that she left "a letter expressing her deep distress that she had felt unable to discuss her plans with her daughters without risking making them accessories".

Great story, pity about the narrator

A much better voice. This narrator, had a high-pitched tone that grated on the ears, her idea of an English accent was ludicrous, and her gaps between words was off putting.

What other book might you compare Strangers in Company to and why?

Would you be willing to try another one of Casey Holloway’s performances?

If you could play editor, what scene or scenes would you have cut from Strangers in Company?

I didn't last the distance, the narration totally distracted from my enjoyment.

I went and found my old falling apart paperback to finish the story. I had been pleased to see that some of the JAH titles had been recorded. Do them again with a better voice.

WHAT A COME DOWN!

What other book might you compare Strangers in Company to and why?

The author writes in a style similar to Mary Stewart and and I enjoy her books just as much as The Ivy Tree and My brother Michael.

She reads the whole book at high speed and in a high breathless voice. I do not know what her language background is, but she mispronounces the most ordinary English words. I often had to "decipher" words as they did not sound anything like the real thing.

The story. I have been looking out for audiobooks by Jane Aiken Hodge, especially those dealing with the 20th century. This audio version was really a big disappointment

I really like this story and author. it's a light mystery and a bit old fashioned. Quote fun. But the reader is so stilted. she has pauses in strange places and listening to her almost ruins the book.

Good mystery but Audible reader not appropriate for the story

I read this book many years ago and enjoyed it immensely. However, the reader for the Audible version was not right for the story. The protagonist is a middle age woman and the reader had a “little girl” voice and often mispronunciation things. I’d recommend the book which touches on the duplicitous Greek Communists at the end of WW2 as well as giving nice historical references to Ancient Greece. I like the subtle romance of a woman awakening from deep insecurities.

A Big Let Down

I read this book years ago and loved it. The story still stands up all these years later, but the narrator ruined it. Clearly not a native speaker from Britain, her poor delivery and strange cadence (leaving breathy gaps between words when they should be pronounced in one breath) kept taking me out of the story. AND THEN there were the inexcusable mispronunciations. Sometimes quay was pronounced like KEY as it should be other times like quail! Gaol was pronounced goal not like jail. Narrators should be from the same country as the main character. American and English English is too different. This Narrator did not understand the rhythm in which the language of the story was written, and in her struggle to get the accent right completely failed to get the emotional meaning of a sentence across when emphasizing and stressing a phrase. The words alone were left to carry the meaning. it would have been more enjoyable to have re-read the book.

A reasonable story. BUT the WORST NARRATOR I have ever listened to. She is unable to pronounce even the most basic words. I cannot believe anyone could pass this as saleable. Such incredible blunders and appalling delivery