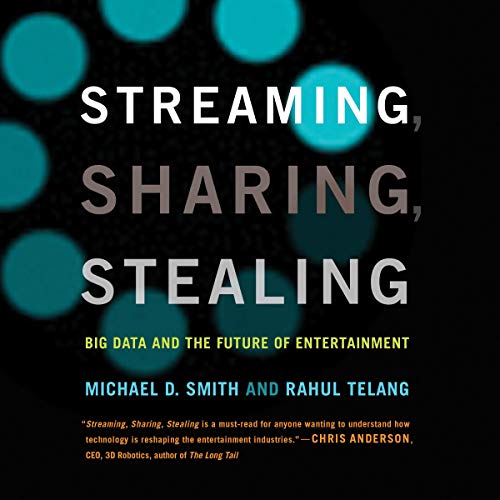 Traditional network television programming has always followed the same script: executives approve a pilot, order a trial number of episodes, and broadcast them, expecting viewers to watch a given show on their television sets at the same time every week. But then came Netflix's House of Cards. Netflix gauged the show's potential from data it had gathered about subscribers' preferences, ordered two seasons without seeing a pilot, and uploaded the first thirteen episodes all at once for viewers to watch whenever they wanted on the devices of their choice.

In this book, Michael Smith and Rahul Telang, experts on entertainment analytics, show how the success of House of Cards upended the film and TV industries - and how companies like Amazon and Apple are changing the rules in other entertainment industries, notably publishing and music. We're living through a period of unprecedented technological disruption in the entertainment industries. Just about everything is affected: pricing, production, distribution, piracy. Smith and Telang discuss niche products and the long tail, product differentiation, price discrimination, and incentives for users not to steal content. To survive and succeed, businesses have to adapt rapidly and creatively. Smith and Telang explain how.

How can companies discover who their customers are, what they want, and how much they are willing to pay for it? Data. The entertainment industries, must learn to play a little "moneyball." The bottom line: follow the data.

Couldn’t make it past chapter 7 - author drones on about the studies he published - and can’t bring the information to light than makes it easy and interesting to listen to.

The experiments in the book provide sound evidences to support their arguments. A content business professional will definitely benefit from the book.

Projects an interesting view about the advent of the internet and it resulting in a perfect storm that in its self is acting like a disruptor..

Brilliant analysis of the entertainment industry

If you work in media or are just interested in the area, this book is a must read.

So good! If you want to know about how data affect entertainment this is the book for you.

In depth review of media marketing. Well written with compelling arguments. Makes it understandable how streaming got us here from there.

Interesting for those in the industry

Found it enlightening and gave a good insight as to why our company is doing what it is.

downloaded this book almost by a misclick. turned out to be amazing insights and history of the entertainment industry. must read. would obviously recommend