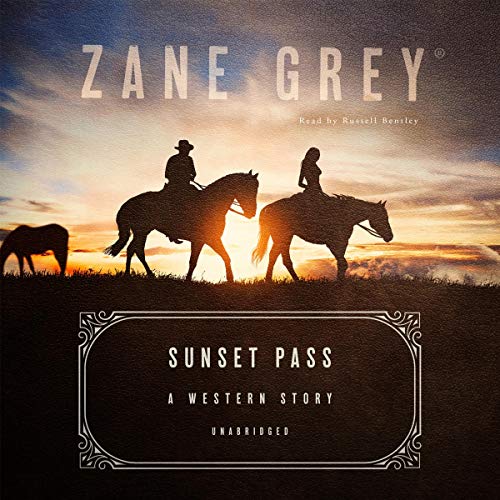 Trueman Rock is a daring young cowboy and rider. Six years ago he had to leave the cowtown of Wagontongue because of a history of gunfights and run-ins with bad hombres. Since then, he's become a man who only uses his gun when he needs to, on rustlers and crooks. Now, he's returning to his hometown. But things have changed. The town and its people aren't what they used to be. He expects to find some of his enemies there to welcome him, but instead finds they're all dead. In their place is the Preston family.

The Prestons have just about taken over the town of Sunset Pass and reign supreme. But Trueman discovers that there's a brooding mystery surrounding the Preston clan, centered on Ash, the eldest son. Ash is a cold, vicious, and slippery man. Unfortunately for Trueman, he finds himself falling in love with Thiry Preston, Ash's sister. Ash holds a jealous love for her and she'll do just about anything he says, and he's ruined more than one love-struck cowboy before Trueman came along.

Trueman Rock's quest to win over the girl he's fallen for brings him face-to-face with the sinister true face of the Preston clan and their control of Wagontongue, and he must confront them to be with Thiry and save the town he loves. Sunset Pass, first published in 1931, is another dramatic tale of the West by Zane Grey.

What listeners say about Sunset Pass

this narrator is the worst I have heard. Reading aloud is not easy but you would think a pro could still do an acceptable job. NOT AT ALL.

Long and drawn out and predictable

Overuse of adjectives to the point of wanting to quit listening and overuse of the adjective “ejaculated” instead of “exclaimed”. I became bored with this book.

Such an amazing story, but poorly narrated. The narrator has talent, just seemed like it was the first time he had read it.

The man reads like a 2nd grader. The female voices were silly, the attempt at western accents were laughable.

I can’t get through the book due to the orator. He has no inflection and sounds like a history school teacher who hates his job. He uses little to no punctuation. The book may be good, but I probably won’t listen long enough to find out.

One of the worst readers I’ve heard

I will be honest and that it was difficult to rate the story because the reader was so terrible. I had a very difficult time staying with the story because of that. The book sounded as if it was being read off of a ticker, words above a middle school vocabulary seemed to be a challenge, and the phrasing and emphasis was off so badly at times that I had to replay to understand what the author intended - or just for a laugh. I lost track of the mispronunciations after awhile, but two in particular will stick with me a long time. “COY-oaties” (shy Cheerios?) was his eye-rolling mangle of coyotes, and then there was the time our hero listened to the distant sound of elk “bulging.” Not sure I really want to know what that sounds like! Does no one actually listen to these before they are released? Will probably try another Zane Grey sometime, but NEVER another Russell Bentley!

Struggled to get through this story. The story it's self was good, but I felt the story was smothered by the details.

Wish they would have women talk instead of a man make it sound queer. But over all it was really good

Enjoyable Listening and I do not mind telling you

Zane Gray writes great westerns and Russell Bentley can tell western stories just as great as they are written.

Was very please with the story, but the narrator ruined it. Sounds like a six year old kid reading the book. What a shame.
Would have like to finish the story, but, the narration was so bad had to quit.