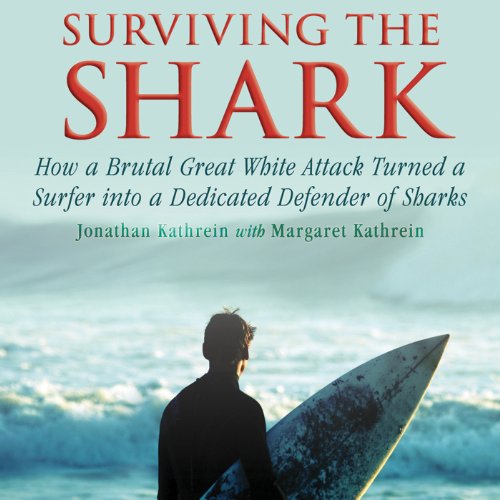 Sharks are one of the most misunderstood creatures on the Earth; their occasional attacks on humans have left them with an undeserved reputation as monsters. But when Jonathan Kathrein was attacked by a Great White in 1998, at only age 16, leaving him with devastating injuries, he had the opposite response: sympathy for these ocean predators. His memoir Surviving the Shark: How a Brutal Great White Attack Turned a Surfer into a Dedicated Defender of Sharks enthrallingly performed by experienced audiobook narrator Adam Verner, takes listeners out into the waves on the day Kathrein was dragged underwater by the shark, and follows his difficult recovery and transition into an advocate for shark conservation.

In Surviving the Shark, Jonathan Kathrein describes his incredible shark attack experience. The book covers all aspects of Kathrein’s survival, beginning with the eerie moments just before the attack, when something smashes into Kathrein’s hand as he paddles on his board, waiting for a wave off Stinson Beach in northern California. Realizing it is probably shark, and possibly a great white, Kathrein tries to paddle away, furiously trying to make it toward shore, where he sees some of his friends on the beach. But it is too late, as the great white returns, slams into him, then grabs his leg and pulls him underwater, thrashing him back and forth, trying to rip his leg off. How Kathrein is able to escape and make his way to shore, despite his horrific wounds, is nothing short of amazing.

But that’s just the beginning, as he now faces months of physical and mental rehabilitation, all the while dealing with the constant media attention that the attack has generated. Gradually, with the help of his family and friends, Kathrein makes a recovery.

Today, Kathrein gives lectures on shark conservation, as well as on such topics as avoiding shark attacks when you’re in the water. In this book, he not only writes of his ordeal, but also delves into shark behavior, and explains his desire to spread shark awareness. There is also an underlying theme of tremendous familial love and Kathrein’s extreme fervor for life.

What listeners say about Surviving the Shark

Every detail of everything ugh

Every detail of everything because the shark attack isn't enough for a book. Seriously it felt like a paper someone was writing where they needed more words or descriptions to take up space. Listened up to the attack, then ended up skipping to the beginning of each chapter looking for the informative part. I hate saying anything bad about a book because I know the written worked hard on it but this just didn't cut it for me.