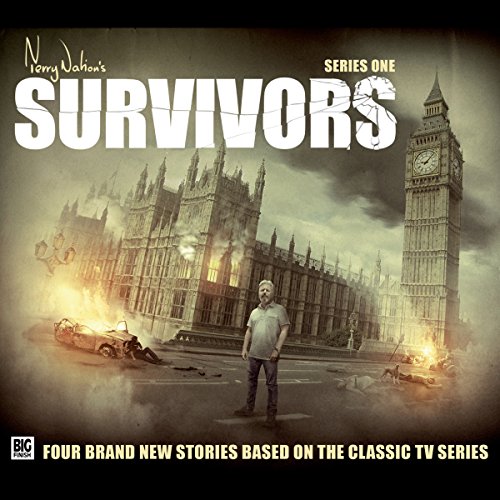 It begins with just a few people falling ill. Another flu virus that spreads around the globe. And then the reports begin that people are dying....

When most of the world's population is wiped out, a handful of survivors are left to pick up the pieces. Cities become graveyards. Technology becomes largely obsolete. Mankind must start again....

1.1: 'Revelation' by Matt Fitton. When people begin to die of a new strain of a flu virus, newspaper journalists Helen Wiseman and Daniel Connor investigate. They uncover a terrifying story - but will anyone ever get to read it?

1.2: 'Exodus' by Jonathan Morris. Billions of people have died across the globe. Cities are rife with secondary diseases, and the survivors attempt to make their way out of London.

1.3: 'Judges' by Andrew Smith. After a storm wipes out much of their community's supplies, Greg and Jenny go in search of new provisions - much to Abby's disapproval.

1.4: 'Esther' by John Dorney. Greg, Jenny and their new friends are trapped. Will they ever make it out alive?

Note: Survivors contains adult material and is not suitable for younger listeners.

What listeners say about Survivors Series 01

I have become a huge fan of full cast audio productions. So much that now when I look for my next listen, I try to find one with at least multiple narrators if not a full cast. The Survivors series was a great addition to my widening library. Although some of the situations were a bit far fetched, just listening to the production itself made it worthwhile. The voice acting was above par and the added music and sound effects brought it even more to life. I will definitely be continuing the series.

If you've seen the television show, you'll be disappointed by listening to this audio drama.

3\4 of this is an audio drama while the remaining 1\4 of this drama are production notes. An expensive book (audio drama) and it's not even a full length drama!

Would you listen to Survivors Series 01 again? Why?

As a kid I watched the 1st Series of Survivors on 70's TV. I only caught up with series 2/3 on DVD in 2016. But now I wish I never bothered. It's actually Big Finish who belatedly carry on Terry Nation's vision. I have series 1 to 5 on CD. But I re-bought Series 1 & 2 of these Big Finish audio's to put on my Kindle. Good writing and production deserve to be rewarded to continue. That's how good, telling and impact memorable this series is to listen too again!

The montage of characters are all great. All having a history to impact into later recordings. Stick with it.

You can't pick one scene when there's a great arc depicting all the Horrors and Honourable Highs of Human Nature.

Morals and Ethics should always Survive!

Terry Nation would have been Proud. Had this remained the tone of the TV series, he would never have left!

As a huge fan of the 70's TV series I was pleased to find this new audiobook series. It's great to hear from Jenny, Abby and Greg. A believable story that ties nicely into the original. As mentioned in at least one review I did have issues hearing certain parts of the audio whilst driving and had to turn the volume up.
Overall I'm more than happy with the story and performance

An interesting concept & great cast, ruined by the worst sound engineering I've ever heard in an audiobook.

Not just some parts being too quiet (some of this was obviously a directorial choice to show people being further away or muffled) but voices clearly not being picked up properly when recorded so no matter how hard you turned it up the words weren't clearly audible.

It's almost like they used really old school microphones that would only record when the actor's mouth was directly in front of them so the sound kept dropping out.

Very disappointing as this was otherwise and interesting production.

Another issue was the choice to use original cast actors in the same roles. A nice idea but rather confusing when you realise a character who sounds like they're in their 50/60s is actually meant to be in their 20/30s.

Also worth bearing in mind is that the last 30 minutes or so of the book is interviews with the cast. They are interesting but it means the book is even shorter than it seems.

If you have an audible account & can get the book for £6 or so it's reasonable but please don't even consider paying the £40 (!!!) they want for it. I don't see ago they could justify that for a 4 hour book even if everything else were perfect!

I loved the original and the more modern TV series of Survivors and find the theme fascinating.
This version is an interesting modernisation of Terry Nation's idea, and having some of the original actors from the 70s adds credence.

However! How on earth did this recording get past quality control? It sounds as though the actors are sitting round an enormous table that only has one microphone which is down one end. Some voices are so loud that you have to run over to turn down the sound for fear of disturbing the neighbours, and the next voice sound so quiet and far away you have to run over to turn the sound up. Whispers are not spoken in a stage whisper, (to keep the sounds equal), but quite literally whispered, so you can't hear them. One misses chunks of the story because so much is too quiet to hear, whilst other parts are deafeningly loud.

If you are prepared to spend a LOT of money on this recording, then put aside the time to sit beside your player of choice, with one hand on the volume control, so that you can constantly adjust the sound depending on who is speaking. You will have very busy fingers.

I also bought series 2 and 3 and am dreading them being the same.

I remember well the original TV version. Gave up on the remake, but this is excellent Great cast and performance. Dark and a chilling reminder of how fragile our take on civilisation as we know it is.

Really enjoyed the story line and the quality of acting but.... the stupid music drove me up the wall. There was far too much of it and it really didn’t match up with the drama. Also I’m a little hard of hearing and it often overwhelmed and acting. Without the music it would have been 5 stars all round. Not sure why some dramatised audio books even have music as it really doesn’t fit the format and completely spoils it for me. It should be compulsory to label those books as “Contains dramatic music for effect, please avoid if you find this annoying” or better still, don’t include music!!!

Hard to listen to at times but worth sticking with! Shows how fragile our society is, when things start to happen that we can't control or do anything about! Hopefully we won't have anything like this to deal with ; but they say we are always one day away.....

Well I don’t know why it’s cathartic to listen to this in the middle of our 3rd Covid lockdown, but somehow it is. Great full cast recording.

really did enjoy listening to this during lockdown, yes I know a bit ironic but took me back to when this was on the TV years ago
cannot wait for the next series 2 downloaded today to start listening.

Really enjoyed this audio drama. Reminded me of the TV series in the 70's and nice to see some of those actors back to lend their voices. I see 2 more seasons are available in Audible so I'm going to get those now, but I believe there are at least 9 seasons available ! Any chance of these all becoming available on Audible anytime soon ?

Well made but lacks good writing

I love radio plays. Has great sound effects and it's like a movie for your mind. This would be good for anyone who likes end of the world or survival books. The writing was poor. I didn't care for the characters and in fact I found them annoying and I tried hard not to turn it off. The story was dragged out and the script kept repeating over and over. I found when characters talked to them self it was unconvincing and forced and fake.