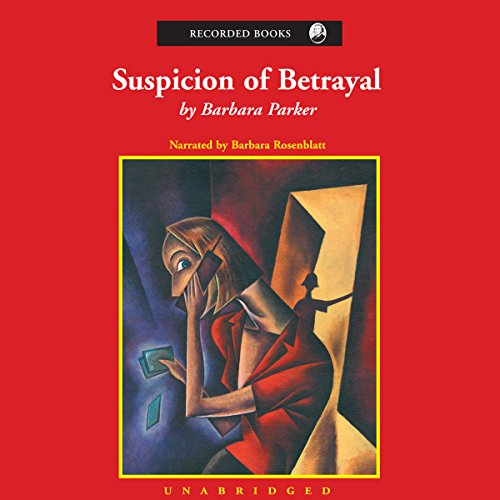 Best-selling author Barbara Parker has earned her place among the top mystery writers with her trademark blend of suspense, legal procedural, and a touch of romance. Suspicion of Betrayal is a riveting story filled with enough plot twists and shady characters to keep readers puzzled through the conclusion. Miami attorney Gail Connor’s plate is already full when trouble comes calling. First, there is a menacing phone call, and then doctored photographs arrive that foretell the violent death of Gail and her 10-year-old daughter, Karen. As Gail searches for answers, the problem isn’t that there aren’t any suspects--the problem is that there are plenty. A former prosecutor in Florida, Parker spins a seedy tale and infuses the narrative with a chilling authenticity. Narrator Barbara Rosenblat is the ideal voice for the intelligent and strong-willed Gail. Rosenblat also narrates Parker’s Suspicion of Deceit and Suspicion of Guilt.

What listeners say about Suspicion of Betrayal

Where does Suspicion of Betrayal rank among all the audiobooks you’ve listened to so far?

This book was the biggest best seller of Parker's "Suspicion of'' series featuring tempestuous lawyers Gail Connor and Anthony Quintana. It's also one of my favorite audiobooks because of Rosenblat's stellar narration. I bought this audio after already listening to it via the library. I'm just sorry that Audible.com has yet to make avail No. 1 and No. 2 in the series -- Suspicion of Innocence and Suspicion of Guilt. Audible does offer 3, 4, and 5. This book is No. 4. Suspicion of Deceit is No. 3 and Suspicion of Malice is No. 5 -- both avail via Audible.com, and both narrated by Rosenblat.

This book is the most emotional, troubling and frightening of the eight books, and also is terrific. It really mixes the world of law and crazy clients with the changing ethnic world of Miami, and the rocky relationship of these two lawyers -- which reaches its height in this book. The main characters also are flawed, which makes them more human, and the plot more believable.

The scenes with Gail and Anthony are all top-notch, whether they are sparring or making love. Parker wrote fabulous bedroom scenes, which really reflect the tension and passion of the pair, in and out of the courtroom. This book is a thriller, though, not a romance novel -- although sex and passion play a role throughout the series.

I REALLY hope Audible makes No. 1 and No. 2 available -- both also narrated by Rosenblat. The last 3 books (Suspicion of Vengeance, Suspicion of Madness and Suspicion of Rage) were narrated by others and are much less satisfactory. Would be wonderful if Audible re-recorded those books with Rosenblat -- who should have been hired to complete the series to begin with. She particularly does male voices well, especially Anthony. And she is unmatchable as Gail. I am just sorry that Parker died in 2009, since she was a terrific legal/thriller author (she was a lawyer) and likely would have written more books in this series. And I'm surprised I didn't trip on this series until this summer. Audible's available versions are well done. There's just not enough of them.

I was new to this series. I loved the book. Wish all of them were on audible because I would rather listen to them than read them.