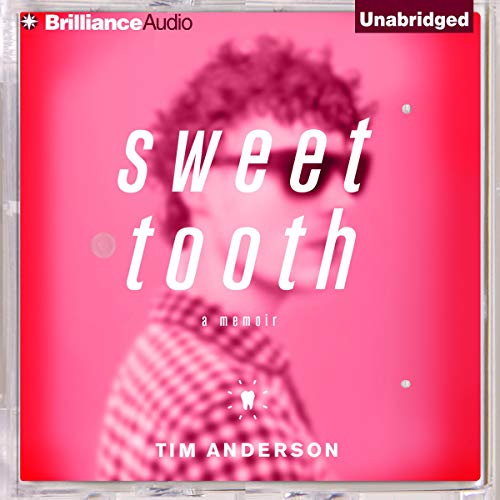 What’s a sweets-loving young boy growing up gay in North Carolina in the '80s supposed to think when he’s diagnosed with type-1 diabetes? That God is punishing him, naturally.

Sweet Tooth is Tim Anderson’s uproarious memoir of life after his hormones and blood sugar both went berserk at the age of 15. With Morrissey and The Smiths as the soundtrack, Anderson self-deprecatingly recalls love affairs with vests and donuts, first crushes, coming out, and inaugural trips to gay bars. What emerges is the story of a young man trying to build a future that won’t involve crippling loneliness or losing a foot to his disease - and maybe even one that, no matter how unpredictable, can still be pretty sweet.

What listeners say about Sweet Tooth

This was such a fun book! I really enjoyed it. Now on to search for more by this author.

Oh my god, everyone should read this book, they will find it hilarious. If you're diabetic and/or have been or currently are a young gay boy with no clue, this goes doubly for you!

I had my eye on this one since it came out. Once I saw a few folks had weighed in on it and liked it, so I figured I'd give it a shot. I'm glad I did because I really enjoyed the authors style and pace. It's funny and genuine. It brought me back to the same time in my life and had me laughing at the crazy things that all teenagers go through despite our different personal challenges.

Warning, It's not for anyone squeamish about young adult sex!

Nice nostalgia from the 90s with music and friends. I wouldn't say its riveting material, but a nice story.

Loved the narration and also the sarcastic humor of the author. Well written but I was shocked when the book ended as it did.

OMG I loved it

What did you love best about Sweet Tooth?

Even though it was about struggling with diabetes, the book was really funny. The inner thoughts of Tim were hilarious.

What was one of the most memorable moments of Sweet Tooth?

Tim getting rejected by guys over and over..that was sad for me.

Which character – as performed by MacLeod Andrews – was your favorite?

Tim's mother. Her accent was funny. I love how she cared for Tim.

I want a sequel.

The author writes in one of my favorite styles, self-deprecating hilarity. And the narrator's delivery was spot-on! I really enjoyed this story of teen angst coupled with a diabetes diagnosis and coming out gay. While I am older and straighter than the author, as well as being female and not from the South, I completely related to each tale and LOVED all of the music references. I kind of want to go visit Tim & Jimmy, though I'm having a hard time settling on a hostess gift.

Didn't get past the 1st Hour

I guess it was supposed to be funny. just found it drool. After reading some 'reach out and grab you books this was not worth the time. Thankful for Audible's return policy

This is a delightful story about a young man coping with being gay & having type one diabetes. This story spans several years, from middle school through life until post college, so you feel immersed in his life in more ways than one. Regardless of your sexuality, you'll find many things in common with our lead character. Adult "scenes" are handled in an adult manner & there is no profanity or vivid descriptions of those adult situations. The story provides a happy ending - not always common when being gay or have diabetes is concerned! I liked it & recommend it.

Loved this, kept me laughing.

Where does Sweet Tooth rank among all the audiobooks you’ve listened to so far?

The funniest thing I've had read to me. I greatly enjoyed everything about this book. The authors humiliation as he delt with the trials of his disease.

Tim of course, but James is great also.

Have you listened to any of MacLeod Andrews’s other performances before? How does this one compare?

Listen it's good. My coworkers were thinking I was insane busting out laughing my doing my mindless tasks.

Although I found the narrative switching between first and third person jarring at first, I soon fell into the author's rhythm. You get a good feel for the struggles of sugar dependence even once you know that overdosing could kill you, mix that with a burgeoning identity that is different from that the constructs of society, and you have a heavy mixture indeed, which is handled well for the most part. Perhaps the old voyeur in me, having been teased by lustful young musings in the first half of the book, felt a little let down in the later chapters as Tim glazed over the gay interactions. I'm not suggesting there should have been graphicness, but a bit more of the earlier descriptive flare in these sections would have lifted them for the reader I feel.