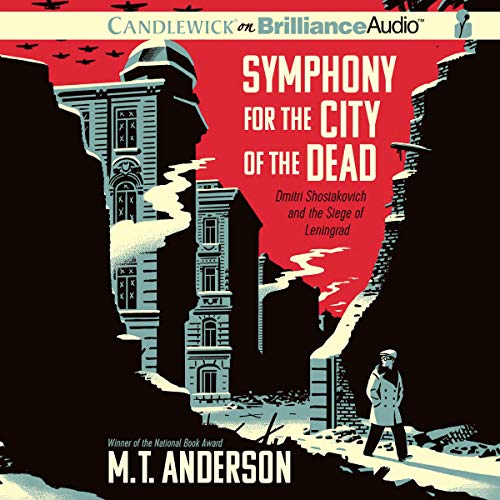 In September 1941, Adolf Hitler's Wehrmacht surrounded Leningrad in what was to become one of the longest and most destructive sieges in Western history - almost three years of bombardment and starvation that culminated in the harsh winter of 1943-1944. More than a million citizens perished. Survivors recall corpses littering the frozen streets, their relatives having neither the means nor the strength to bury them. Residents burned books, furniture, and floorboards to keep warm; they ate family pets and - eventually - one another to stay alive.

Trapped between the Nazi invading force and the Soviet government itself was composer Dmitri Shostakovich, who would write a symphony that roused, rallied, eulogized, and commemorated his fellow citizens - the Leningrad Symphony, which came to occupy a surprising place of prominence in the eventual Allied victory.

This is the true story of a city under siege: the triumph of bravery and defiance in the face of terrifying odds. It is also a look at the power - and layered meaning - of music in beleaguered lives. Symphony for the City of the Dead is a masterwork thrillingly told and impeccably researched by National Book Award-winning author M. T. Anderson.

What listeners say about Symphony for the City of the Dead

Before beginning this audio book, I was only minimally familiar with classical music and had even less knowledge about the history of Russia under Communist rule. Therefore, much of the information in this book was new to me. I was both horrified and inspired by this account of life in Stalinist Russia, especially during the Nazi siege of Leningrad, and amazed by Shastakovich himself. Kudos to M. T. Anderson for clear and flowing prose and for his fine performance of it. His pronunciation of Russian names and places seemed spot on, but I don't speak Russian so I'm only guessing. I also appreciated hearing snatches of Shastakovich's music, even though Anderson's description of it was so good that the written word would have been sufficient to get a feel for it.
I highly recommend this audio book, whether you're a classical music lover or not, a history buff or not. I was neither and it has changed my life.

This book blew me away

Would you listen to Symphony for the City of the Dead again? Why?

I'll have to wait a while until I listen to this again, just because it is so intense. I had to carry tissues while I listened because the tears kept coming, both from sorrow and joy. I usually avoid books read by the author, but MT Anderson did a fantastic job.

The people of Leningrad who inexplicably survived the siege really formed the backbone of the story. Anderson provided a balanced portrayal of the good, the bad and the ugly of ordinary people struggling through unimaginable horror.

The emotional denouement was the performance of the 7th symphony in a starving Leningrad still under siege. People who had been eating wallpaper paste for months found the grace to be moved by a piece of music.

This is the kind of book you force on people, begging them to read it just so you can discuss it with somebody. It's technically a young adult book, but I'm middle aged and never found it simplistic. I wish this book could replace To Kill a Mockingbird, which my kids read in high school a few years ago; the possibilities for meaningful discussion are amazing.

Very illuminating; art is not created in a vacuum

This little piece of a story gave me a much greater understanding of the big picture. I have always loved Shostakovich's music but it is even more fascinating to get a glimpse into his heart.
This audiobook also includes some of his music.

A powerful and true story about music's influence on the outcome of World War Ii. I savored every minute.

shocked how awesome this was

so awesome I learned much and it was read so well. one of my favorite audible experiences.

Most excellent book I've read in a year

Would you listen to Symphony for the City of the Dead again? Why?

Symphony for the City of Dead takes its listeners back to Russia in the 1940s and lets them feel as if they're experiencing it for themselves.

I loved the blend of history, humanism, and I enjoyed learning about music.

A entertaining education on Shostakovich .

A thoroughly entertaining education of Shostakovich and the devastation reigned on the Russian people by Lenin and Stallin.

Fascinating mix of history and music

As a classical musician who has always loved the work of Shostakovich, this book immediately appealed to me. I knew he had a fascinating life and troubled history with the Russian government throughout his career, but this beautifully written book brought it to life like I never imagined. I love WWII history as well, so this was the perfect book for me. The audiobook version is ready perfectly by the author, including tiny snippets of music. I wished there was more music! But that is my only complaint. One of the books I have most enjoyed reading in my life.

Fascinating biography of Dmitri Shostakovich, paralleling the Russian Revolution, the rise of Lenin and Stalin, and the German invasion, centered around the siege of Leningrad. Great story read by the author, M.T. Anderson, about Shostakovich writing his 7th (the Leningrad) Symphony, a true artist's response to the events and conditions. Lots of detail about the rise of Stalin, his unparalleled brutality towards his own people and his incompetence, and about the invasion and heroic and tragic actions of the Russian people. Truly marvelous.

A nuanced and thought provoking look at Soviet politics in World War II, at the power of art in the hierarchy of human needs and at the heart of the Russian people. Read movingly by the author himself. Highly recommend.

His music is exceptional, so is the story behind one of his greatest works. The depth of the historical perspective I have learnt from this book was unexpected - this is powerful.

An Engaging,Horrifying and Uplifting Story

This is a wonderful audio book. It vividly depicts Shostakovich's precarious position in Stalinist Russia and describes the horror of the Great Terror and the siege of Leningrad. In addition, we get clips from Shostakovich's works to illustrate the points being made. This book is gripping - I cannot recommend this enough.