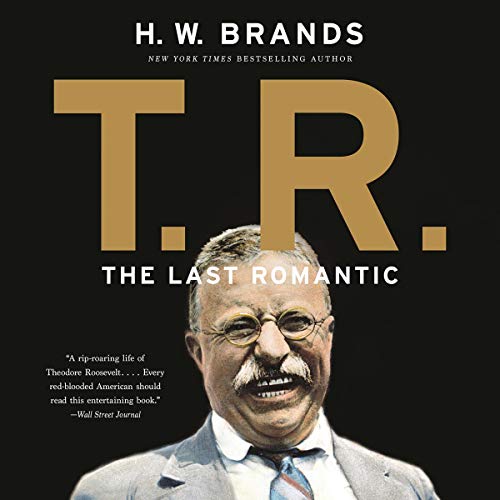 Lauded as "a rip-roaring life" (Wall Street Journal), T.R. is a magisterial biography of Theodore Roosevelt by best-selling author H. W. Brands. In his time, there was no more popular national figure than Roosevelt. It was not just the energy he brought to every political office he held or his unshakable moral convictions that made him so popular, or even his status as a bona fide war hero. Most important, Theodore Roosevelt was loved by the people because this scion of a privileged New York family loved America and Americans.

And yet, according to Brands, if we look at the private Roosevelt without blinders, we see a man whose great public strengths hid enormous personal deficiencies; he was uncompromising, self-involved, and a highly imperfect brother, husband, and father.

Beautifully written, and powerfully moved by its subject, T.R. is the classic biography of one of America's greatest and most complex leaders.

"Brands makes the case that Roosevelt believed in heroes and measured himself against giants of history and literature.... He puts them in vivid context with often wry narration and an impressive depth of historical research." (USA Today)

"Roosevelt's life in Mr. Brands' able hands is a demonstration of the remarkable power of the human will. Roosevelt literally created the character he lived out, and then lived within it until he finally became his creation." (Washington Post)

"Brands' narrative is lucid, fast-moving and unblended by hero-worship. In a single volume he has packed Roosevelt's 60 years of ambition, adventure, expediency, achievement, and, finally, frustration at having peaked too soon." (Publishers Weekly)

What listeners say about T.R.

Brands injects too much opinion into this biography. Roosevelt was certainly a complex figure in American history with both positive and negative attributes; however, I felt throughout the book Brands spent too much effort highlighting the unfavorable qualities. In my opinion, it should be the goal of the biographer to write a balanced profile and allow the reader to come to his or her own conclusions. While I think the book is an enjoyable read at times, Brands severely failed in that regard.

This book was super boring but I must admit that I just listened to Boone which was much more exciting!

Great book on the life of TR

I knew nothing about TR and now feel as though I could accurately retell his life story. What an amazing man.

I enjoyed every second of this wonderful biography. Vividly captures Roosevelt and his era. Highly recommended.