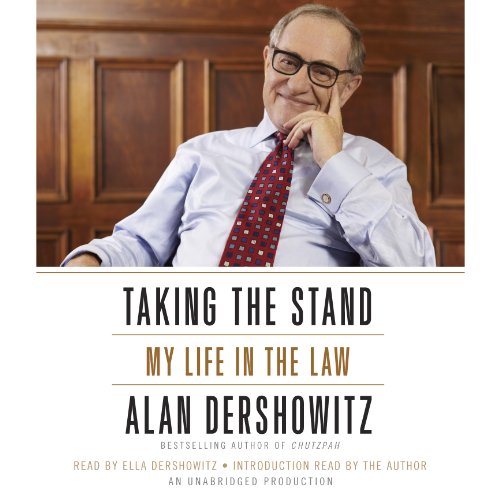 America's most prominent legal mind and the number-one best-selling author of Chutzpah and The Best Defense, Alan Dershowitz, recounts his legal autobiography, describing how he came to the law, as well as the cases that have changed American jurisprudence over the past 50 years, most of which he has personally been involved in.

In Taking the Stand, Dershowitz reveals the evolution of his own thinking on such fundamental issues as censorship and the First Amendment, Civil Rights, Abortion, homicide, and the increasing role that science plays in a legal defense. Alan Dershowitz, the Felix Frankfurter Professor of Law at Harvard University, and the author of such acclaimed bestsellers as Chutzpah, The Best Defense, and Reversal of Fortune, for the first time recounts his legal biography, describing his struggles academically at Yeshiva High School growing up in Williamsburg, Brooklyn, his successes at Yale, clerking for Supreme Court Justice Arthur Goldberg, his appointment to full professor at the Harvard at age 28, the youngest in the school's history. Dershowitz went on to work on many of the most celebrated cases in the land, from appealing (successfully) Claus Von Bulow's conviction for the murder of his wife, Sunny, to the O.J. Simpson trial, to defending Mike Tyson, Leona Helmsley, Patty Hearst, and countless others. He is currently part of the legal team advising Julian Assange.

"One of the most high-profile lawyers in America, known for his work on newsworthy cases...raises provocative questions about the many dilemmas in modern American jurisprudence, including those related to the separation of church and state, affirmative action, human rights, and the right to privacy. Dershowitz offers much of interest...." (Publishers Weekly)

"I loved this book. If I could trade lives with anyone, Dershowitz would be high on my list, minus the death threats and tchotchkes." (Larry David)

"Alan Dershowitz’s real-life use of science to win murder cases rivals anything on CSI and any other fictional drama. Cheers for a riveting autobiography." (Ted Danson)

Professor, you need to do the narrative! Please!

Would you consider the audio edition of Taking the Stand to be better than the print version?

No, it would be a lot better if Professor Derhowitz did the audio reading himself. He is so well know and admired for his talent as a lawyer and a teacher. I really like to listen to him not his daughter. He always teaches me something especially when he is on T.V. Why would Audible devalue this audio book by not having him read it. The daughter should have read the forward and he should have read the book. Big mistake. I can't take hours of a women's voice and trying to remind myself I am listening to Alan Dershowitz words.

Who would you have cast as narrator instead of Ella Dershowitz and Alan Dershowitz ?

Alan Dershowitz should be the only one doing the narrative.

Tremendous book! Thank you for writing it counselor!

Please re record with Alan for us! He is a brilliant lawyer. I want to hear him not his daughter.

A remarkable life, regardless of your politics

Amazing and well-written. I'm a conservative Mormon attorney who loves Dershowitz. I had no idea just how involved he was with such important historical events.

Would you listen to Taking the Stand again? Why?

No. Having the a male author's daughter read his autobiography just doesn't make it.

A female voice reading the autobiography of a male author is totally distracting.

I have no problem with Ella's narration except for the fact that when I hear an autobiography I listen to it as if it is being told to me by the author. Therefore, there should be some similarity in voice and cadence, but, of course, there is none and that makes it hard to end up in the authors shoes.

I rate the book as a 3 star only because I think that the book will be good and I haven't listened to enough of it to provide a fair evaluation. if I am able to overcome this problem I will probably finish the book, otherwise it will have to be reluctantly returned. I would have already done so and bought the hard copy if my vision permitted me to do so.

Though it will not occur it would have been great to listen to the author narrating it. I have heard him speak many times, sometimes silently cheering or booing, but always recognizing it is the Dersh. His narration would make the book come alive and have greater impact.

I must repeat it is not because Ella is bad, she isn't. She is just the wrong narrator for this particular book.

great book but a kind of confusing narration

though narration was excellent, it's read by authors daughter which is actresses, it's kind of confusing that narrator is opposite sex as author which tells story of his life

Another marvelous look at society, government, family and the law. Unabashed discourse from his perspective.

could have been but...

This book was not worth reading. The subject is fascinating. I have great respect for the author.
The active choice he made to use his daughter to tell his story was a big mistake to me.
I could not even finish it. The only reason why I scored the story and the overall book 3 stars is my awe for his legal talent.
Not worth a credit.

The only problem: The delivery was good and followed the tone of the narrative beautifully, but this book should have been read by a man and not by a woman with the high and sharp voice of Ms Dershowitz. This was my first book of Mr Dershowitz, but certainly not my last.

The narrator does an injustice to this book.

This story was compelling. That is the only reason that I finished the book. Several times, I found myself annoyed wanting to put the book down and then I would remind myself that it wasn’t the story but rather the voice that bothered me. I appreciate Ella’s enthusiasm however she needs to save it for her own book. First off, it was very distracting to have a female voice for a male biography. Secondly she had such strong, enthusiastic voice that was clearly not yet he author’s as heard when he himself came on at the end of the book.I’m sorry, I really couldn’t get past that. I wish I had read the actual book first.

If you are interested in the law then this book is it. Dershowitz writes well and his book is full of good ideas and is a joy to read.