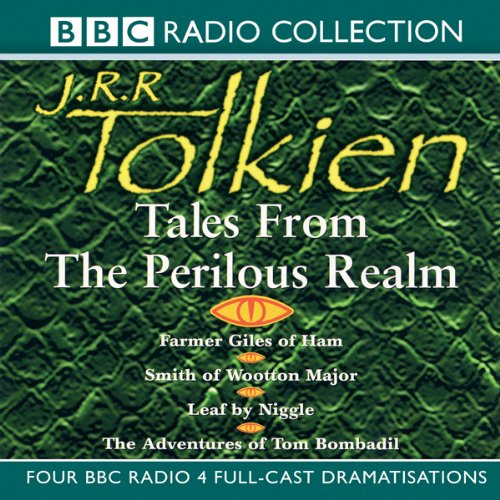 Tales from the Perilous Realm (Dramatised)

Michael Hordern stars as J.R.R. Tolkien, author of The Hobbit and The Lord of the Rings, in four BBC Radio full-cast dramatisations. Tolkien's tales of myth, mystery, and rumbustious exploits have been specially adapted for radio by Brian Sibley, one of the dramatists of the highly acclaimed BBC radio production of The Lord of the Rings.

In 'Farmer Giles of Ham', having accidentally shot a giant, Farmer Giles finds his brave reputation being tested by Chrysophylax the dragon.

In 'Smith of Wootton Major', when young Smith eats a piece of cake containing a silver star, he is granted access to the magical land of Fäerie.

In 'Leaf by Niggle', a thought-provoking allegory on the theme of creativity, the painter Niggle embarks on a fateful search for perfection.

In 'The Adventures of Tom Bombadil', join Tom and the Hobbits in scenes from The Lord of the Rings which were not included in the BBC Radio 4 dramatisation.

What listeners say about Tales from the Perilous Realm (Dramatised)

Leaf by Niggle was so exquisitely written that it brought me to tears!

Leaf by Niggle was so exquisitely written that it brought me to tears! What a glorious collection.

For those who love Lord of the rings and the hobbit, the last tale of the four includes Tom Bombadil and Frodo, Merry, Pippin and Sam!

The depth of these stories was missing and so watered down it was a waste of time. Tom Bombadil was nothing more then taken from the Fellowship.

I enjoyed the stories very much. I will surely listen to them again. Good stories for every one to hear.

I was distracted by all the different characters, and the stories themselves were not that great. That was surprising given that I liked all of J.R.R Tolkien's other work. I think just having one person read it and having a better story would have been nice.

Has Tales from the Perilous Realm (Dramatised) turned you off from other books in this genre?

No I just didn't like these stories in particular.

Would you be willing to try another one of Matthew Morgan’s performances?

Yes he sounds very pleasant and I enjoyed listening to him. It was all the other voices I found distracting.

Disappointment. After reading books like the The Hobbit and Lord of the Rings I really liked his writing style and the type of stories he dreamed up. I have even read some of the unfinished tales from Tolkien and really liked those. This one was just kind of boring and not really as imaginative as his other work.

There was one story I found somewhat enjoyable, and that was the first one (can't remember the name) it was the best one out of the four.

It sadly does not include the full Adventures of Tom Bombadil. Other then that it is a fantastic interpretation!

This is a delightful book. The production was pretty good. Worth reading. For consistency I wish the voice actors were the same as the Lord of the Rings.

I've had this in my library for a few years, and somehow never got around to listening to it. I did so the other night, and was deeply saddened by what was done to at least two of the brilliant pieces of Tolkien's short fiction, especially Smith of Wooton Major.
It's not the performances, which are first rate. I recognize a number of voices from the BBC Radio adaptation of Lord of the Rings, and over all the performances did great service to the language of the scripts.
The problem was the language of the scripts. To focus on the heartbreaking one for me, Smith was robbed of most of its uncanny faerie sheen, by a well-intentioned effort to make the language more accessible and the story, well, cannier or perhaps more adapted to the misunderstanding of children that Tolkien points out in "On Faerie STories". The adapters have dumbed down the story, and, well I know my kids would see it and be displeased.
Smith of Wooton Major is a gem of faerie light and the longing of mortals to see it. This adaptation wasn't quite something you'd see on Nick at Night, but it sure went farther in that direction than it could have done, and, if I didn't know the original text, I'd think I understood, and be the poorer for not knowing.
I am panning this production which made me weary. Others may react very differently, so I'm not telling you to avoid this; some of the beauty of Tolkien's language still shines through somehow, but I found no consolation, escape or recovery in it.

Very engaging, and more entertaining due to the audio drama. I think my favorite was the last tale of Tom Bombadil. It gave more insight to Lord of the Rings.

I got my Tolkien fix!

I enjoyed these four stories that gave me a quick and enjoyable Tolkien fix for a little while!

Where does Tales from the Perilous Realm (Dramatised) rank among all the audiobooks you’ve listened to so far?

The dramatizations do not spoil my enjoyment of the books, which have been, and continue to be, favourites. If anything could be improved, it would be to omit less material from the books - longer would be even better !

All the performances are good.

Could have listened all in one sitting, but saved some for later.

was unsure what to expect. a dreary rendition but no the actors really brought these great stories to life.