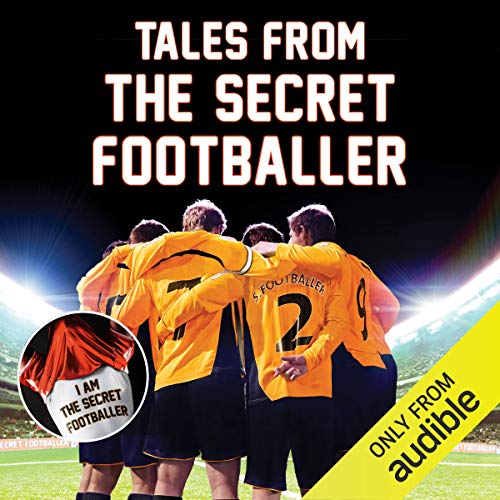 Tales from the Secret Footballer

Written by: The Secret Footballer
Narrated by: Damian Lynch
Free with 30-day trial

The Secret Footballer is back. And this time he's not alone.

"The Banksy of the beautiful game." ( Shortlist)
"If you are tired of reading autobiographies that merely brush over what life as a footballer is really like then Tales from the Secret Footballer is something you have to read. The author's off-the-record look at the beautiful game will teach you more about football than you knew were possible." ( Sports Gazette)
"What happens behind closed doors at Premiership clubs usually stays firmly shut behind closed doors. Not if the Secret Footballer has anything to do with it." ( Loaded)

What listeners say about Tales from the Secret Footballer

I wonder who this guy is...time to get some investigation going. I know he's a spurs fan and had a lot of trouble playing arsenal...

Fantastic from start to finish. Thoroughly enjoyed it. A great insight and a must for all football supporters. Now onto the the next one...

Much less about football in this book

If you could sum up Tales from the Secret Footballer in three words, what would they be?

There is a lot less content about football in this book, and much more detail about his depression. I can see why this put off a number of TSF followers.

Which character – as performed by Damian Lynch – was your favourite?

All credit to Damian Lynch, did a great job performing the book. Even the dodgy Scottish and South African accents

Could of done, 5 hours is very short for an audio book.

I still enjoyed this book, although it felt more like TSF was getting a lot off of his chest writing this book than writing about football. There is a lot of brutal honesty in this book that you really respect the guy for, however I think going into such detail about the quantum mechanics was a mistake, and the point he was trying to make with it kind of fizzled out.

Still found myself moving straight to the next TSF book, so it didn't put me off that much.

Excellent listen to the on goings inside and outside the training ground.
Leaves you wanting more tales from footballs biggest stars and football teams.

Honesty only gets you so far

TSF is again commended for railing against stereotype and providing some good insights. However I didn't enjoy this as much as his first book. The anecdotes were the weakest part of the book, particularly the not-so-amusing ones about fellow pros and their offseason japes. The narration was also a little too blokey for my taste.

Without many books out there like it beggars can't be choosers but the guy is quite hypercritical, arrogant and pretty dislikable.

Would you try another book written by The Secret Footballer or narrated by Damian Lynch?

What could The Secret Footballer have done to make this a more enjoyable book for you?

Actually talked about football rather than his personal drug habbits, depression and giving lessons on quantum mechanics.

Disgust at the utter awfulness!

If he spent as much time talking about football as he did with drugs, quantum mechanics, and a personal life that we can not relate to as his identity is hidden then the book would have been fine. if you liked the first book stick to that, dont waste your time or money on this, it is truly awful!