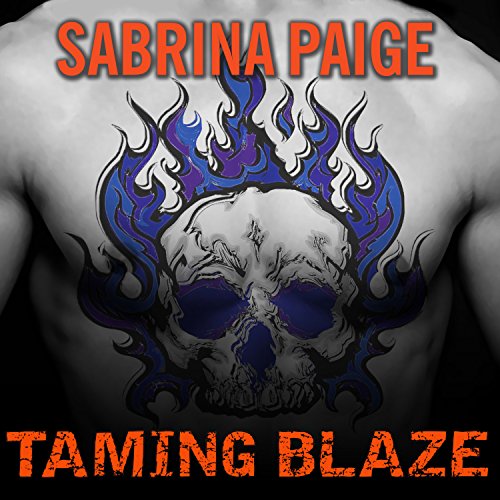 Dani doesn't believe in love. She knows that love only leads to heartache. Besides, dating is tough when your dad is one of the most powerful crime bosses on the West Coast. So instead of relationships, Dani believes in one-night stands. But when a casual fling goes frighteningly wrong, she runs home to the only person she knows will protect her-her father.She doesn't make it. Dani's stranded on the side of the road with no one to help her. Except Blaze.Blaze has been through hell and back. Raised by his junkie mom, the Inferno MC is the only real family he's ever known. As their jaded vice president, he'd do anything to protect the club.When fate throws Blaze and Dani together, sparks fly. Their attraction is undeniable, but can this jaded and broken pair find happiness? Or will Dani's family secrets tear everything down, including the MC?

"I love Sabrina Paige. Her books always entertain me and take me on a journey." (Not Another Damn Blog Blog)

What listeners say about Taming Blaze

What did you love best about Taming Blaze?

I like the love story of Blaze and Dani ... but the MC is almost posed as an afterthought. The ruthlessness of her father the master mind criminal was not convincing either.

Blaze because he is a hot character and male. I do think the book made him appear weak in many instances though.

Did Arika Rapson and Nelson Hobbs do a good job differentiating all the characters? How?

Arika Rapson is a good narrator, but I did not think she was convincing in this instance. Her voice is almost too light to really come across dangerous. Nelson is also a great narrator but he contributed to the perception, in my opinion, that Blaze was not as strong as he should of been in this story.

No.... it was a good listen. I enjoyed it despite the watered down version of a criminal empire and a hostile MC .... perhaps the written word made them more believable as dangerous.

This is worth a credit or sale. I would not pay the asking price. This book. like so many others popping up lately are not truly MC books. It lacks the grittiness to make it believable.

Male narrator is the best part

The story was ok but a lot of the female lead's portion of the story are juvenile and the female narrators voice is terrible. She sounded like she was nervous and a smoker. Her wobbly scratchy voice was so distracting my annoying. Ugh. She ruined the book for me I don't think I can stand to listen to her any more. Traditionally I don't much care for male narrators doing female voices but this male narrator was so good in both male and female roles I wished he had done the entire book solo

I liked the story line from the first three chapters I listened to but the narrators voices made it unbearable to get past any more than that.

This is definitely not the best MC romance I’ve ever read or listened to. It had some good points and it had some bad points. First, this novel has little actual “club life”, included. I neither think that is good or bad.
Here is what I liked
The narration: Nelson Hobbs was awesome, Arika Rapson was Ok.
Characters: really liked Blaze, the Hero. Heroine often came across as an impatient, spoiled Bitch.
Plot: Felt like there were too many time jumps to really develop the H/h’s relationship.
Secondary characters were not developed at all. They are still strangers at the end of the book.
Sex scenes were pretty smokin👍🏻
👎🏻the conflict that starts at the end of the book that should hook you in and convince you to continue the series, is not revealed near enough to entice me to want to continue.
The novel wasn’t all bad, it was an ok listen. I doubt it is a book I would want to listen to again.
-V from Kansas

Absolutely the worst MC book I have ever read. Watered down version of an MC book. There is not one good thing I can say here. Sorry. If these books did not cost so much, I would have stopped listening after the first 30 minutes.

I read Taming Blaze in 2015. Doing a reread plus listening to it on audible felt like visiting an old friend. Dani and Blaze are fiery together. Their chemistry is palpable, and the connection they have is undeniable. The only thing that bothered me is that Dani is a little judgmental. Overall, this is a suspenseful, thrilling, entertaining, and sensual story.
Narration was ok.

DNF - I got bored

I don't know if I would have finished had this been a book but it got boring so fast. Not a lot of action after the beginning - when they got to the cabin, the story just fizzled out for me. Perhaps it was listening to the female narrator whose voice sounded whiney and annoying. I just gave up an ddind't even care enough to find out how it ends. Love the male narrator though, if there had been more of him, I might have made it further.

No disrespect to the female narrator but her performance was not meant for this story.

this was my first MC story by Sabrina Paige

Sabrina Paige did an amazing job taking me into a new world and creating characters with depth and connectivity.

def check it out if your looking for a new type of biker book to read!