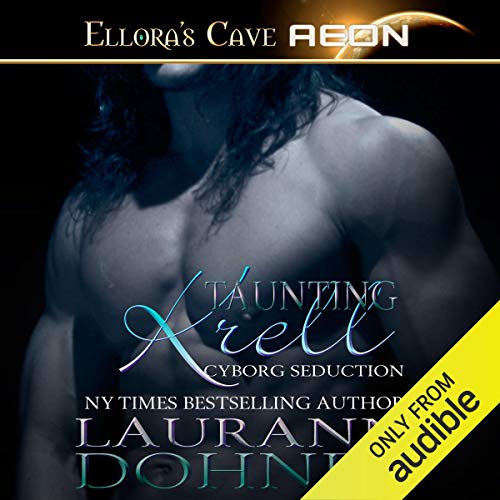 Book 7 in the Cyborg Seduction series.

Krell hates humans. They left him scarred and undesirable to females. He’s lived a lonely existence in his home world because of their brutality. So he’s angry when he’s ordered to interrogate the captured human. She’s the enemy, a soldier from Earth. He’ll show her the same mercy they showed him. None.

Cyan didn’t expect to survive her mission against the Markus Models but she’s stunned and elated to be confronted by cyborgs. The past and present collide, however, when she sees Krell. He’s part of a dangerous secret from another life - and he’s also completely irresistible.

Krell is certain Cyan can’t be trusted. He’s determined to keep her at a distance…but Cyan is just as determined to get the big, sexy cyborg into her bed.

What listeners say about Taunting Krell

Laughed all the way to the end

I'm totally addicted to these Cyborgs. Somehow LD comes up with an interesting, super sexy, and seriously funny way to tell the exact same story over and over, and I just keep buying them and raving over each one! Krell is definitely one of my favorite Cyborgs thus far, he's a cranky bugger, a loner, totally paranoid, but falls hard for a sarcastic feisty woman that helped the Cyborgs gain their freedom years before. This book is definitely one of the funnier stories in the series in my opinion. A great, short listen for anyone into paranormal erotic romance. Excellent!

One of the best of the series!

Man O Man.. this was soo good. I love how this takes you all the way back to the beginning when the Cyborgs first gain their freedom. I always thought it sucked that none of the important humans that helped get talked about. Just the one from Steal's story... but this was awesome, b/c Cyan is the human that truely free the Cyborgs.

Krell and Cyan are Hot as sin together... all secreative but passionate at the same time. One of the best in the series hands down. I really hope Dohner can top this book.

Narration was great. I hope Mindy continues to narration all of the Cyborg books.

Great Credit, buy or sale... well worth it.

Another Great Book in this Series!

Great book. Only problem is, this is the last one available. Blackie is next and can't wait. Hurry up Audible. Narrator as soooo good! She got it. Hope Mindy Kennedy reads the next one.

Another good addition to the series

Another Fantastic book In The Series

Cyan is a soldier from earth sent on a solo mission to destroy Markus Models (psychotic robots that look human but are not sentient beings). She's completely kick-butt and has no problem holding her own against anyone. While on the ship where she was after the Markus Models she runs into cyborgs. She's so stunned she drops her weapons because the last thing she would ever do is hurt a cyborg. Why? Well, there is a lot more to Cyan than meets the eye. The cyborgs who capture her think she is a spy and when they send Krell in to interrogate her, things get out of control and she stabs herself in the leg to prove she's not exactly human. I don't want to give away any spoilers about her real identity, but she played an important part in Cyborg history. When she realizes what kind of laws they've implemented on Garden regarding mating she's heartbroken and rips their council a new one in a very impassioned speech.

When Krell lived in captivity on earth he was tortured and scarred by humans and is considered undesirable by cyborg women. So much so that he's not in a marriage union and has even been excused from joining one because no women want him. It's been 60 months since he's been with a woman so he's a little cranky. Zorus, a council member, orders Krell to take Cyan into his home so he can discover whether or not she's a spy or someone they suspect is very special to cyborgs. Cyan doesn't make a secret that she's attracted to Krell but he thinks she's using him for some ulterior purpose because he assumes no woman would ever want him.

With Krell's inability to trust the gorgeous woman falling for him, there is a lot of
mis-communication and really tender moments. This book was heavier on action, romance and sexual tension as opposed to actual sex. In fact, I think this one has the least amount of sex compared to the others in this series.

Taunting Krell really brought out some issues in the series that I've been waiting for. Issues that deal with Cyborgs' and the way they force their females to marry 2-3 males. The last book made progress with the `human ownership' issues and I like that this book had even more progress within the Cyborg society. On a side note, I can really see Ms. Dohner's growth as a writer in this book. Where some of her previous books have felt repetitive in places, this one just had the perfect balance of everything I look for in a romance. My heart broke for both Krell and Cyan as they struggled to find happiness. I'm really looking forward to the next book. Taunting Krell is an action-packed sci-fi erotic romance that's a perfect addition to this series.

Mindy Kennedy delivers another enchanting narration of the story.

If you could sum up Taunting Krell in three words, what would they be?

What was one of the most memorable moments of Taunting Krell?

Cyan comes off the ship, drops to her needs, thinking Krell left her ...

Krell needed more than he was willing to admit! He was so deeply scarred and not just physically. Loved that he didn't think he needed Cyan and when he realized it he was willing to do whatever it took to keep her ... Loved Cyan, strong, sexy, and lonely with her own scars. They need each other. I love when the guy and gal both are scarred in their own way. The action was great too ... updated cyborgs (Marcus Models) ... Cyan's on it ... she was one tough cookie ;o) Love this series.

My review is for the whole series

I loved the start to the series, I thought it was awesome and something new to the PNR genre. Everyone else seems to be doing vampire and werewolves and cyborgs were definitely different until you get through books 2-6. The whole series is pretty much the same story over again just exchange out the cyborg names and the human female names and its the same plot line over, and over again. Cyborg man by unusual circumstances runs into small human female ( I mean small none of the women are taller then 5'3!) and wants to keep her and start a family unit. Now the last installment Taunting Krell was the best by far because the author did things a little different, I hope she continues mixing it up and I hope she'll put a tall human female in the series as well.

Taunting Krell has one of the most dramatic, attention-getting plots Laurann Dohner has written in this fascinating series. It's filled with wonderful characterizations and such high emotion that I was totally absorbed in my listening. We find out more about the Cyborg world and the making of them. Laurann doesn't spend a lot of time fleshing out Krell, but she doesn't need to. His personality and the demons that drive him have been told and retold in prior books, which is one factor in recommending this series be read in order and from the beginning. In this one, Krell is his usual human-hating self. He's socially challenged, which Cyan, who calls him the “grim cyborg,” figures out early on. Cyan is a particularly strong, yet vulnerable character. She doesn't need to be coddled or catered to and can stand quite well on her own two feet, not to mention kick ass either with her bare hands or weapons. I found Taunting Krell is a superior addition to the Cyborg Seduction series. All our needs are met with great action and Hot Steamy Sex. Totally fulfilling. Loved it !!

I remember this book from the first time I read it, but I forgot just how much this book has in it.
You have Krell who hates humans, and you have Cyan who loves Cyborgs so much that she risked her frail human life to help them flea from Earth.

Now that she is more machine than human, it’s not always easy for them to trust in who she really is. It’s a pretty fantastic book about learning to believe in what you can’t see but what you feel. Emotions are a messy thing but everyone has that gut instinct right.

This whole dynamic is fun to listen to, Mindy again does a phenomenal job. Loved it and can’t wait to listen to more!

THESE books just keep getting better and better!
So much action, steamy, dreamy, alpha, hot sex! And happy endings!

I love all the stories but this is the best. Really different story & one that gripped my heart. Not as repetitive as the others in series & one I will listen to again. Fab

Another exciting addition to Laurann Dohner in the cyborg seduction series. Mindy Kennedy is an amazing narrator but I just wished she has a more manly gruffer voice, she is an expert for a female voice though. Anyway this is an exciting series and i highly recommend it.