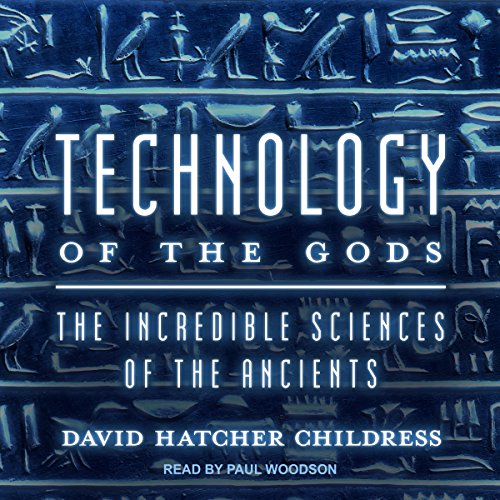 Technology of the Gods

Popular Lost Cities author David Hatcher Childress takes us into the amazing world of ancient technology, from computers in antiquity to the flying machines of the gods. Childress looks at the technology that was allegedly used in Atlantis and the theory that the Great Pyramid of Egypt was originally a gigantic power station.

He examines tales of ancient flight and the technology that it involved; how the ancients used electricity; megalithic building techniques; the use of crystal lenses and the fire from the gods; evidence of various high tech weapons in the past, including atomic weapons; ancient metallurgy and heavy machinery; the role of modern inventors such as Nikola Tesla in bringing ancient technology back into modern use; impossible artifacts; and more.

What listeners say about Technology of the Gods

This book is an eye opener into the past... I would recommend this read to those that are very curious about our ancient world history. You need to be extremely open minded in other to appreciate this book. A lot of unanswered questions concerning the origins of all the wonders and megaliths of the world can be answered or partially answered here.

He quotes Thomas from "we were not the first" so many times that I question his copyrights. And yes, the phrase "Could it be...? Atlantean students believe so" occurred. Would not recommend this book.

this is one book I can listen to many times and still be amazed at the possibilities.

Excellent book, well researched and presented in a thoughtful even-handed way. Often times, the subject of ancient advanced cultures turns into a wide-eyed rant that ends up going off the rails in a series of conspiracy theories and hyperbolic attempts to explain the unexplainable. Not this work. It is well done and there is nothing wild or hyperbolic about it.

It was an interesting and entertaining listen. For me, maybe a bit too long. I liked the narrator.

This book is fascinating, with all of the information that can be pulled together from around the world. However at times it is dry and long when the author reads from those books the information that he shares. He does share his insights and facts then reporting it like news however when he reads the sources, it gets pretty long. but I still enjoyed it.

Not what I was expecting

The grammar is off, and it’s just sloppy. It could be so much more polished. I had high hopes after resonating with the author from watching Ancient Aliens and was severely let down. Only book I’ve returned.

good but alot of info

Loved it, just enough info went into the evidence without rambling &/or over speculation to make nonexistent connections for over the top claims, and multiple view points are given on most topics to allow the reader the opportunity to form their own opinions.

well thought out and intriguing the narrator has an excellent delivery. this book opens many Avenues of thought... and I'm sure I'll be reading it again

The best way to summarise this book is to use its title ‘Incredible Sciences.’ It is full of incredible but devoid of science. It’s all just comments from ancient fables and historic news stories sold as truth. The wealth of 5 star review is, quite frankly, terrifying. I thought we’d evolved beyond this nonsense?

Love David Hatcher-Childress and this book

very well researched piece of work. extremely broad and insightful i enjoyed this over a few weeks actually. i would have much preffered David read it himself i like the way he speaks including his references to "odd-ball" mysteries etc please David read the next one yourself!!! i would love that. very upset to see you not coming to Manchester in June now.

Technology of the gods

This book certainly makes you think. A must read for anyone who has even the slightest interest in this subject.

An open minded view of the mysteries (and conspiracies) of ancient history. Considering the most controversial rather than the most sensational. 5*

Advancement into the Modern Era?!

Interesting read - however I hope people can use this information not just to change the view point of technology in history, but to encourage and motivate developing countries to use what they know from technology history into the modern era. Some of these countries that are mentioned to be so far in advanced in the Ancient world are lagging so far behind in this modern era. Till now I am unsure of the reason for this, but surely things should improve if what they had in the past was as advanced as this books claims them to be! I therefore hope that these new technological revelations of the Ancient World will help developing countries to improve quicker and save the world economy as well as improve climate change in quick time.

After reading some Robert sepehr books and videos I've been looking for a long length Compilation like audiobook about pyramids and the ark of the covenant.

Amazing information about all topics, most I knew but the theories made connecting the dots easy.
Also I have been looking through many maps of the azures sea beds to spot signs of a atomic blast that could of created or enlarged the mid atlantic ridge and that theory was in this book.

Then out of nowhere was a small section about Edgar Casey who is someone I've recently come across.

Its like the information FINDS me in unlikely places and this "awakening" is driving me rather then me searching for it. It's a mysterious journey but I love every twist and turn.

compelling arguments against the status quo

evidence for the real purpose of the Great pyramid.

evidence of the use of advanced technology in ancient times