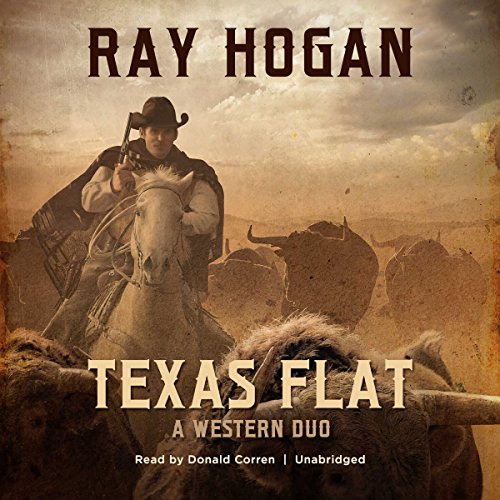 In this duo's title story, 28-year-old Dave Bradford is close to achieving his dreams. In an effort to expand his cattle ranch and marry Sirral Drury, Bradford plans to sell 400 of his cattle in Wichita. But JJ Farman, owner of the biggest ranch in the basin, calls a meeting and warns Bradford he best not try to take the cattle across Texas Flat, even though it's open range. Going around Texas Flat would add two hundred miles to the cattle drive, another 10-12 days to the journey.

Bradford knows that if he caves to Farman, who is backed by his hired gunmen, Farman will not only control Texas Flat, but all the ranchers in the basin. Can Bradford make it to Wichita without being caught? And what will happen if the drive is stopped?

Although Cole Rinnegar can little afford to leave his ranch in Black Canon, New Mexico, he decides to make the 10-day trip to Rock Springs after receiving a summons from his brother Harvey, who he hasn't seen in five years. Cole is supposed to look up a woman by the name of Mattie Foster, who he figures to be a saloon girl. Instead he meets a respectable businesswoman who runs a local bakery. Mattie has been hiding Harvey, who robbed the local bank and was shot. His dying wish is to return the money to the bank, but Cole discovers there are plenty in Rock Springs who do not want that to happen.