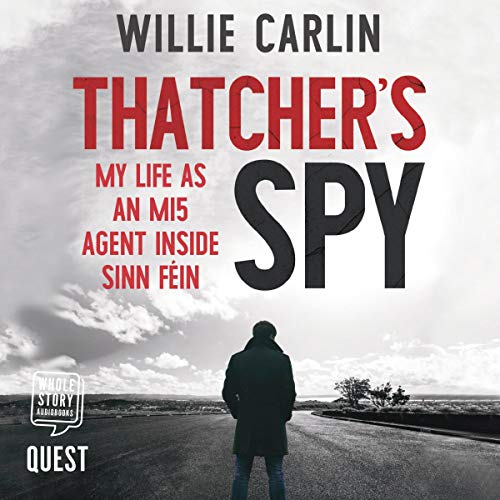 In Thatcher's Spy, the Cold War meets Northern Ireland's Dirty War in the remarkable real-life story of a deep under-cover British intelligence agent, a man now doomed forever to look over his shoulder.

In March 1985, as he climbed the six steps of Margaret Thatcher's prime-ministerial jet on the runway of RAF Aldergrove, little did Willie Carlin know the role Freddie Scappaticci played in saving his life.

He was MI5's man at McGuinness' side and gave the British State unprecedented insight into the IRA leader's strategic thinking. When Carlin's cover was blown in 1985, Thatcher authorised the use of her jet to whisk him to safety. Incredibly, it was another British spy inside the IRA's secretive counter-intelligence unit, the 'nuttin' squad', who saved Carlin's life. This is his story.

What listeners say about Thatcher's Spy

Hard to Listen to

I find the majority of this story to be just that a story. I’ve no doubt that the guy was an informer however he was just that he was not an undercover agent but at best an paid asset. He uses historic incidents to base his alleged activities around and provide some credos to it. Not for one minute do I believe a ministerial jet was out at his disposal. I also agree with other reviewers the narrator needs to be briefed on the military terminology. Very poor.

The rank of Lieutenant in all British Forces is pronounced Leftenant. And Corp or Corps is pronounced Core.
some of the editing made the narrative sound very clipped and almost robotic.

Very long chapters and much self-admiration. There were some unforced errors in the narration: other reviewers have refered to the pronunciation of Corps but also the Irish is badly butchered. The best one though was "omnibusman" for ombudsman. Errors aside, I enjoyed the narration overall -- more than the story.

Not a great read or listen

Not a great read, it starts of ok but then follows a leftest conspiracy theorist agenda.

Can't get past the shocking narration

The narration is dreadful. Please choose a professional narrator rather than a bloke off the street. Very poor indeed.

Tried to listen to this, didn't get by chapter 1, Betty hare to listen to the reader, it's as if he's reading this for the first time, too many pauses in incorrect places.

Disappointed, will be returning book 😔

Very interesting and connected in many ways to other spy books of the same era. Finished the book feeing very sorry for Willie and hope the rest of his life improves.

a disturbing yet informative account of the world of intelligence during the troubles. Also a reminder that our attitude to each other over race and religion is so often impacted by the accident of birth. It takes a special person to overcome such prejudice and bravery to stand against it while living within it. By the way tell the narrator that "corps" is pronounced "core" even in NI.

struggled to listen to this, the fella narrating is really hard to listen to, he stops halfway through a sentence like he's forgotten the next word, this is every 30s or so, apart from that it's a decent book, wish I had of bought a hard copy and saved myself listening to this idiot.

I enjoyed the book , but didnt enjoy the narrator performance. His reading was as he didn't understand English at times . disjointed and slow which took me out of the book story.

An alternative take on The Troubles

This was my first Audible experience & i thoroughly enjoyed it. The story was engaging & entertaining,a surprise given the subject matter. I'd recommend this to anyone with an Irish background or indeed a passing interest in the (at times) turbulent history of N.I.