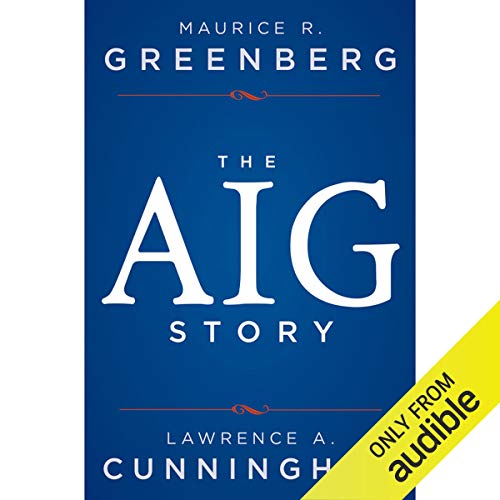 A legendary CEO tells the inside story of building the world's largest insurance company—and the dramatic tale of its near-destruction after he left in early 2005, as successors transformed AIG and drove it to the center of the financial crisis of 2008.

In 1962, Maurice Greenberg was handed leadership of a small, failing insurance company. By 2004, American International Group (AIG) had become the world's eighteenth largest company. Then the financial crisis hit and "Hank" Greenberg's magnificent creation teetered on the brink. You've read other accounts of AIG. Now read the inside story.

In The AIG Story, Maurice Greenberg enlists Lawrence Cunningham to help chronicle the origins of the company and its relentless pioneering of open markets everywhere in the world. They regale readers with riveting vignettes of how AIG grew from a modest group of insurance enterprises in 1970 to the largest insurance company in world history. They help us understand AIG's distinctive entrepreneurial culture and how its outstanding employees worldwide helped pave the road to globalization.

A unique inside account of AIG by one of the iconic business leaders of the twentieth century who developed close relationships with many of the most important world leaders of the period and helped to open markets everywhere.

Enriched by the craftsmanship, research and extensive interviews of other players by corporate governance expert, law professor, and writer Lawrence Cunningham.

The AIG Story captures an impressive saga in business history—one of innovation, vision and leadership at a company that was nearly destroyed with a few strokes of governmental pens. The AIG Story is really Hank Greenberg's story, told from the very heart of events and carrying important lessons and implications for the U.S., especially its role in international affairs, its approach to business, its legal system and its handling of financial crises.

Business with a Handshake

AIG is the thousand pound gorilla in insurance. I always wanted to know more about the insurance company. I know that they do a lot more other than insurance, but I don't have a MBA to fully understand all of the terms. It was most interesting to listen to "The AIG Story" from Mr. Greenberg's point of view and how he formed the group and hired his employee with a handshake, and the drama of getting him outcasted in his own firm. I've read my fair amount on finance, but "The AIG Story" is sub par among them all.

... on everything, but if you want to see, blow by blow, how a business and insurance genius built a world-beating company, have a look. This man's success is not hard to understand, in this light. There are several books out (on audible as well) on aspects of this topic, but nobody has told Mr. Greenberg's story, anything like this. It is filled with action, conversations, confrontations, all the dynamics on the way up. The way things unfolded for AIG in recent times was very unfortunate, and I'm not going to get into one side or another of the blame game. Whatever your conclusions may be about it, this is time well spent for anyone following the story, or aspiring to climb in the corporate world, or just for the avid business history fan. And I love that this book delves into the insurance themes, substantially (if lightly enough to keep moving). Many authors seem to think they can tell the AIG story (and perhaps sell books) as some sort of catchy human-drama-and-hubris story while omitting that. It is important to see what products Mr. Greenberg was innovating and selling, as a part of the description, to really get the story.

Finally--the Other Side of the Picture

I have just finished reading both Hank Greenberg’s The AIG Story, and Ron Shelp’s Fallen Giant. Both books are required reading for anyone who has an open mind, wants to see both sides of a very troublesome and costly period in the economic history of the US. Most accounts in the press over the years since the resignation of Hank Greenberg as CEO of AIG in 2005, focus on alleged wrongdoings of Greenberg and of AIG after he left. The economic crisis beginning in 2007, arguably triggered by the government and the FED attempting to boost economic growth by driving interest rates down and thus stimulating home purchases and home building to “bubble” proportions, ultimately brought AIG almost to ruin. After Greenberg left, it turns out, the Financial Products (FP) unit was allowed to loosen its underwriting criteria and size limits, foregoing hedging in many cases, and participated in credit derivative swaps involving securitized tranches of sub-prime mortgages, which were the instruments first and of greatest proportion to fail. The creation of such instruments was not AIG’s role—that was Goldman Sachs and other investment bankers, but AIG did back them financially.

I had the privilege of working as a profit center manager at AIG between 1995 and 1999. I had a good deal of contact with Hank Greenberg, because I managed a new venture and he had the uncanny ability to understand and be deeply involved in dozens of businesses, including mine. While I did experience his wrath at times, I left with great respect for this amazing executive—37 years at the helm of a business which grew to be the largest insurance company in the world, combining a demand for performance, along with an almost forgotten loyalty to old timers, whether they be elevator operators or executives. Many officers and employees deserve credit, as he often points out, but none remotely as much as he does.

So, I hope many will read these two books and understand that what happened was tragic. I join the few who feel certain the problems of 2007 and beyond would not have developed if he had not been ousted, and that his ouster was entirely inappropriate—a political campaign by an overzealous public officer (Eliot Spitzer) who, along with others later, cost the shareholders and the American public a very great deal. I feel confident that if any of our top 100 financial services companies had a zealous independent audit of the last 10 years of books, they would certainly find a number of “foot faults” of equal or greater impact than the small ones which were used to push Greenberg out. And, I believe we had alternatives in the resolution of the FP portfolio risks developed after his resignation, that cozy government relationships with investment banks like Goldman Sachs precluded—and this cost shareholders inappropriately.


This is a story, largely, of our government at fault.

I’m (not) sorry, you can’t write in the 3rd person and try to show it as an autobiography. It’s hard to “believe” the story when it’s got a pompous vibe. There are many truths in this book but the reality of what this company did can not be explained away by blaming everyone else

Propaganda at its best

While interesting this is too one sided to be taken seriously. As an Aig employee I threw up in my mouth a few times while listening to this crap

As said in the title, the over-the-top performance makes this book almost unlistenable and seriously detracts from the story.

Even though this book is Hank Greenberg's highly biased version of his successes (all his endeavors were successful in this book) and endeavors (in which he was somehow always right and prescient), it is worth reading to get his side of the story and an insight into his organized, methodical, analytical, egotistical and assertive mindset. In spite of the bias, I do believe Greenberg was a remarkable CEO and AIG would not have imploded if he had not been unjustly kicked out.

Unfortunately, the narration was very poor, with the narrator speaking in a sing-song voice and emphasizing the oddest words in the sentence. HIs voice imitations were sometimes LOL funny they were so ridiculous.

It needs what it takes to be such biography of Jack Welch, Ted Turner and Ed Whitacre

I would by any auto-biography i see but so far this is one of the worst.

One chronicles the masterwork of a true visionary building scores of incredible businesses the world over.

The second documents his being targeted by a corrupt ambitious politician, removed and the destruction and government looting of the company he built.

I can't comment on the story but I couldn't listen to more than 5 minutes because of the narration. The narrator has a really strange style where he emphasizes every word, which makes it very difficult to listen to. Maybe you'll be OK, but make sure to listen to a sample before you buy.