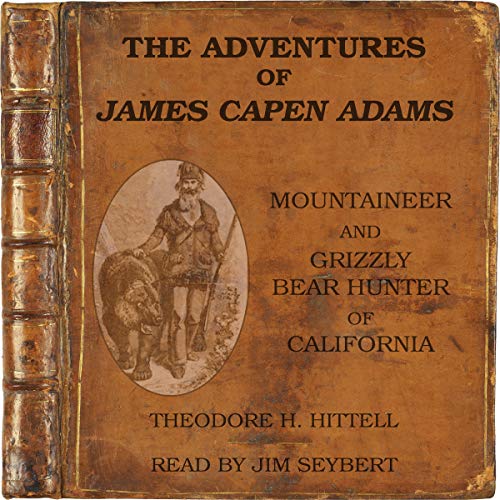 The Adventures of James Capen Adams, Mountaineer and Grizzly Bear Hunter of California

James Capen Adams roamed the Sierra Nevada when California was wild. He slept on the ground, ate what he could kill, mended his own wounds, and made friends with the Native Americans he encountered. Adams captured animals in elaborate traps he built by hand and delivered his prey to zoos, museums, and certain famous exhibitions.

Many of his stories became the inspiration for a popular TV show in the 1980s, featuring a mountain man and his pet bear. This is the true story behind the legend, as told by Adams to respected California historian Theodore Hittell.

What a amazing story

I was amazed listening to this story. The adventure and wildlife that this man encountered was incredible.

Is is difficult to imagine the California he existed in. I cannot imagine seeing a guy walking down the street with a couple of pet grizzly bears. Living off the land, and training bears to go "fetch" and fight for him. And at the same time, a man of character.

There is some graphic descriptions of hunting that may not be for everyone, and the reading of the table of contents for each chapter is a bit distracting, but it is an adventure worth listening to.

It is similar to another book I read, Two Years Before the Mast which also describes a historical California that is difficult to recognize.

Thank you Jim Seybert for bringing this story to life!