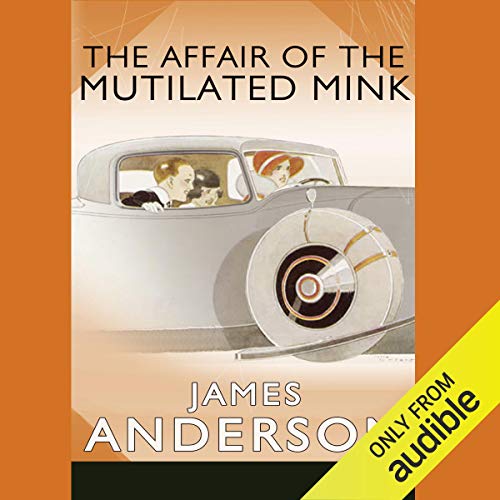 The Affair of the Mutilated Mink

The Earl of Burford can't believe his luck. Rex Ransom, his favourite star from the 'talkies', and his hot-shot producer, Haggermeir, want to film their next feature at Alderley, the family's seventeenth-century country estate.

Somewhat less enthusiastic is the Countess, who finds herself hosting an impromptu house party for the incoming Hollywood crowd. And before long the guest list grows to include two of their wilful daughter Lady Geraldine's dubious suitors, a long-lost cousin, a sultry femme fatale, a bespectacled librarian, an eccentric screenwriter, and a professional blackmailer.

It's almost too much for Merryweather, the family's imperturbable butler, to cope with. And that's before there's a murder in the dead of night. Inspector Wilkins must unravel the baffling mystery - and work out just what a mutilated mink coat has to do with anything.

If you could sum up The Affair of the Mutilated Mink in three words, what would they be?

Lady Geraldine, although a period character she still felt fresh, plausible as a person.

Its just enjoyable - an easy listen.

Pleast get more from this authers or similiar authors.

I love all the references to other detectives in this book. I enjoyed the first book but this one was even more tongue in cheek and was funny while maintaining the mystery plot line,

Great pacing, fabulous narrator, so many twists and turns. Plus it is VERY rated G! Super clean. Why can't all books be like this?

A funny take on a classic house party detective story, complete with poking fun at famous fictional detectives. The plot is elaborate and silly, but that’s just part of the entertainment. Cornelius Garrett reads it excellently. Light fun.

James Anderson's "The Affair of the Bloodstained Egg Cosy" (correct spelling) is a pleasant English cozy mystery with a few laughs and an entertaining cast. The novel drags from time to time with too much yakkity-yak and way too much description of inessentials, but Cornelius Garrett's unfailingly brilliant narration wins through, though thoughts do tend to drift off during the tedious passages.

The boring, boring yakkity-yak and interminable descriptions of utterly uninteresting places and actions never stop. Everyone argues and complains non-stop. Every so often, another unpleasant character appears. There is no humor, no grace, no plot, nothing worth your time or dollars.

This is one of my favorite British Mysteries

It is a very amusing cozy mystery and has more twists and turns of any book I have read. I wish James Anderson had written more.

What made the experience of listening to The Affair of the Mutilated Mink the most enjoyable?

The characters, the setting, the story and a great narrator. Also there's a lot of humour in this story.

What was one of the most memorable moments of The Affair of the Mutilated Mink?

Finding what the actor's secret was. It couldn't think what it might be.

He has a very pleasant, expressive voice, reads at a good pace, and you always know which character is speaking. An excellent narrator.

I laughed several times, some of it was very funny.

I shall certainly listen to this one over again.

What did you like most about The Affair of the Mutilated Mink?

I enjoyed the twists and turns of the plot but most of all the humour, with Chief Detective Inspector Wilkins a very engaging character.

What other book might you compare The Affair of the Mutilated Mink to, and why?

This is firmly rooted in the golden age and even refers to other fictional detectives as if they were real.

Have you listened to any of Cornelius Garrett’s other performances? How does this one compare?

I've enjoyed his reading of the Bloodstained Egg Cosy and the Thirty Nine Cufflinks too. Cornelius Garrett has a very warm voice and it does feel as if he's telling you the story rather than reading it at a microphone.

Yes - I listened to it while doing a mammoth baking session and stuck the headphones on to continue listening while walking the dog.

If you like Agatha Christie you'll probably enjoy this.

Loved it. The narrator was brilliant and expressive. Shame it had to end. Great story.

I enjoyed this even though I sussed out the villain straight away but not the motive.

Where does The Affair of the Mutilated Mink rank among all the audiobooks you’ve listened to so far?

What does Cornelius Garrett bring to the story that you wouldn’t experience if you had only read the book?

8+ hours of sheer lighthearted pleasure. I have all three James Anderson in the Alderley audio books which I will listen to again but I hope there will be another one soon as I cannot find any more online.

What did you like most about The Affair of the Mutilated Mink?

Everything. The characters, the stately home, the intrigue, the humour, the brilliant reading.

What was one of the most memorable moments of The Affair of the Mutilated Mink?

There were several 'psychological' moments, can't say more or might give the plot away!

The whole thing was a pleasure, from start to finish.

Laugh a lot, then a bit more. Realising there is only one more available is likely to make me cry though!

Make sure you read/hear the first in the series before getting this! Then go and get the third!

This is a wonderful mickey take of the Sayer/Christie/Allingham/Marsh style of crime. It's contorted and improbable.

What does Cornelius Garrett bring to the story that you wouldn’t experience if you had only read the book?

Garrett is a good, intelligent narrator - he brings the story and characters to life.

Listened over three or four days, and looked forward to the next session!

An amusing parody of the classic style of detective novels. Sadly, there are only 3 books.

I thoroughly enjoyed this story, as I have the previous two in the series. one of those I wanted to keep listening to instead of sleeping at bedtime!

What a fun romp. This is an English cosy at it's most entertaining. The setting - an English manor; the characters - stereotypes of every English class and profession you could imagine; and the situations - over the top perplexing with heaps of red herrings; are hugely entertaining. If you want unchallenging, pure entertainment, this is a cracker. Thoroughly enjoyed it.

This book is not quite as intricate in its plot as the first book in the series; I did suspect the villain relatively early, whereas in the first book the author's sleight of hand took me completely by surprise. However it is just as full of improbable events piled on top of each other, with seemingly every guest at Alderley having some kind of secret to muddy the waters.

The greatest joy of this book for me was the amusing homage to Ngaio Marsh in particular, as the famous Scotland Yard detective sweeps in and employs the exact methods of Marsh's hero Roderick Alleyn. Local plod Inspector Wilkins steals the show again in hilarious fashion.

Cornelius Garrett's narration is expressive and well paced, adding to the entertainment level of the story. The Affair of the Mutilated Mink is perfect fare for the audio format.

If you are looking for an entertaining story, unusual characters, and a neat resolution, this is the book for you.