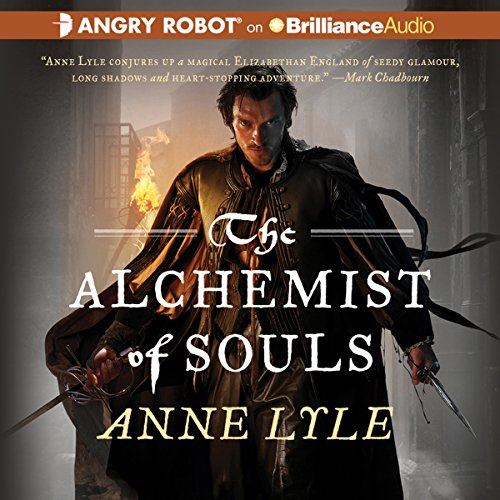 The Alchemist of Souls

When Tudor explorers returned from the New World, they brought back a name out of half-forgotten Viking legend: skraylings. Red-sailed ships followed in the explorers’ wake, bringing Native American goods - and a skrayling ambassador – to London. But what do these seemingly magical beings really want in Elizabeth I’s capital?

Mal Catlyn, a down-at-heel swordsman, is appointed to the ambassador’s bodyguard, but assassination attempts are the least of his problems. What he learns about the skraylings and their unholy powers could cost England her new ally – and Mal his soul.

I enjoyed the book quite a lot. It's a historical-fantasy based in London with a bit of magic etc and a good amount of mystery and action to keep it interesting.

Quite similar to the Locke Lamora books in terms of the type of fantasy novel.

The book does have a gender-role breaking sub-theme but the protagonist is not part of it and it is definitely not what the book is about.
The book has a grand total of TWO gay characters. The other reviewer who mentions every second character being gay is exaggerating quite a lot...

But even if there were more than two gay characters, it's hardly a reason to read or not read the book. The problems you would face reading it are no different than if a hetro guy was reading a book with a straight female protagonist...

Overall there is very little explicit details gay or straight. A few scattered sentences is about it.

Given the price ($8 when I bought it), this book is DEFINITELY worth a read. Very very cheap for 15 hours of solid entertainment!

I was sad that book 2 isn't here or isn't written yet.

If you are looking for an action packed romp, this isn't the book for you. It is a pretty decent story set to a fairly interesting fantasy background.

You'll note that almost every review remarks on the homosexual relationships in the book. I only think it's notable that this is the first book I've ever seen with them front and center. This was far far less sexual or graphic than many heterosexual encounters described in countless other books in the genre. It really is only 3 gay characters and 1 bi.

In the end, it past the time. It lost my interest a bit at the end. And I haven't gone on to the sequel. But I may at some point.

Unusual in a good way

I really enjoyed this story, historically it was fascinating. Not as much magic in it as I usually like in a book though, but enough fantasy to keep me interested. I really liked the heroine, she is really original and I liked her a lot. Each character was really interesting in their own way too. Not sure if I'm interested enough to go the second book though, for some reason. Maybe because I like more fantasy and magic?

I liked it, but why are half the men gay?

What made the experience of listening to The Alchemist of Souls the most enjoyable?

What does Michael Page bring to the story that you wouldn’t experience if you just read the book?

Michael Page is amazing. I've listened to seven or eight books he's read and I've not been disappointed yet.

Really though, there were like more gay men than straight men... I just really don't enjoy listening to a dude talk about how nice an ass another guy has.

What disappointed you about The Alchemist of Souls?

40% of it was pointless and should have been edited out.

Would you ever listen to anything by Anne Lyle again?

I forced myself to listen to this because I purchased book 1 and 2 at the same time. It should have been called: "Homosexuality and Crossdressing In an Age of Religious Fanaticism" She doesn't explain anything about the main thrust of the story or the side characters. It was agony getting through it. I had hoped book 2 would be better once things were established but no.

I will never be able to finish reading this book. For me I find the moral reality being promoted in this novel to be offensive. I made a mistake purchasing this book!

If you are looking for a slow paced, boring book where absolutely nothing happens for hours on end then this is the one for you.

I was so bored with this that after 3 hours of listening to nothing happening i relised I couldnt even name a single character! The story is so thin and uninspiring I couldnt care what happend.

The author seems confused as to what shes tried to create. Is it historical fiction? Is it fantasy? Turns out its nothing but a damp squib. Avoid at all costs.

Bored to near death

If you’ve listened to books by Anne Lyle before, how does this one compare?

not sure to be honest

What does Michael Page bring to the story that you wouldn’t experience if you had only read the book?

it just never really got going, may plots and twists i just never became interested in them.