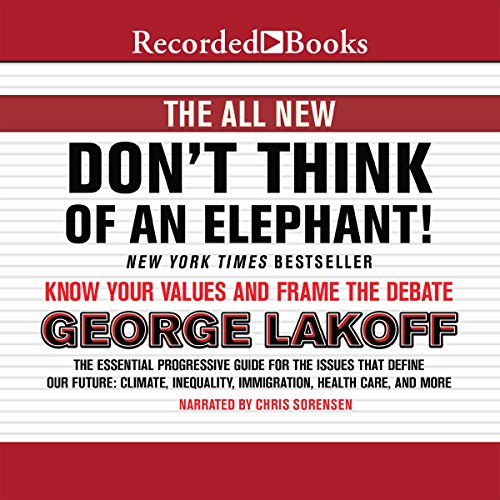 The All New Don't Think of an Elephant!

Since it became an international best-seller in 2004, Don't Think of an Elephant! has been the definitive handbook for progressives who want to articulate their goals and values to voters, understand how conservatives think and why people often vote against their best interests, and frame the political debate. Completely revised and updated to tackle today’s issues, the 10th-anniversary edition not only explains what framing is and how it works but also reveals why, after a brief stint of winning the framing wars in the 2008 elections, the Democrats have gone back to losing them, and what can be done about it. In this powerful new volume, George Lakoff delves into the issues that will dominate the midterm elections in 2014, the coming presidential elections, and beyond. He examines the current progressive and conservative frames on climate change, inequality, immigration, education, abortion, marriage, healthcare, national security, energy, and more. He explores why some issues have been difficult to frame, guides listeners on how to frame complex issues without losing important context, and drives home the important differences between framing and spin. Do you think facts alone can win a debate? Do you think you know what makes a Tea Party follower tick? Do you think you understand how to communicate on key issues that can improve peoples’ lives? Whether you answer yes or no, the insights in Don’t Think of an Elephant! will not only surprise you, but also give you the tools you need to develop frames that work, and eradicate frames that backfire.

What listeners say about The All New Don't Think of an Elephant!

The author makes sense and has put some effort into his book, all of which the narrator made it sound like shit with his voice.

The book was great. The voice actor was weak.

I thoroughly enjoyed this book. Great insight and thoughtful. Some of the points were slightly off in the "messaging" he developed in response to conservative frames. Overall, this blew my mind though.

The voice actor sounded somewhat meek and snoopy to me. I would have liked a stronger voice actor.

I only wish it were longer.

Some great insights here - no matter where you stand on an issue, understanding the conceptual basis is crucial to resisting manipulation. As a linguistics student, I'll probably read Lakoff's other books too.

Must read for all progressives!

This book illuminates a lot. Progressives have a lot of catching up to do. Let's get to it!

Never more needed; should be read by all who want to move us forward. Excellent narration as well. Lakoff provides an essential understanding & toolkit for progressive change work.

The ideas in this book are revolutionary. The narrator was less then stimulating , but the book itself more than made up for it .

Despite people's opinion about Lakoff, his ideas are very interesting and worth your time knowing! There was a line in a TV show, "You call the conservatives stupid, the liberals losers." It's hilarious and kind of true. This book tells you why it is true lol!

A Feast of Strawmen and Fallacies

Best listened 1.25x to 1.5x speeds. While the narrator does a decent job, he is almost painfully slow.

The author is consistent in communicating and using his intended ideas & concepts (framing discussions, values, and word choices), he misrepresents many events, leaves out relevant details, and misrepresents & conflates ideologies (perhaps intentionally?...I definitely began to wonder that but hope not). The author isn't as self-aware as he'd have you believe and seems to even do the very things he complains about or warns not to do. Obviously I disagree with many things and perspectives in the book, but it was a lot of the logical fallacies, omissions of relevant facts, and misrepresentation of differing views which irritated (dare I say triggered?) me the most. In the book the author develops frameworks of "strict father" and "nurturing parent" models within which he tries to cram the differing viewpoints on a wide range of topics and issues. Unfortunately for the author he strains his analogies and frameworks to the breaking points IMO. An example he brings up more than once being Christian beliefs and values. My advice to him for future revisions would be to actually read the New Testament...especially Epistles like Romans.

I listened to this on a recommendation from a coworker for some inside baseball and strategy from the political left, and as irritating as it often was it seems at least helpful from that perspective.

The writing is great and I love Lakoff, but I just could not get past the narrators high, nasal voice. I had to exchange it and get a physical copy.

interesting book at times. More like a political broadcadt than a book. Very hard for a Conservative to listen to.

Great, but only whets appetite

The political landscape is so bad, that even people with encyclopedic knowledge of policy and civil rights rarely reason from frameworks.

Lakoff's framework feels a bit simplistic, overly biologically reductionist. But it is a framework, hence a step in the right direction.

It's also the first book to ever give me an insight into a conservative mind without just making you feel good about not being.

Strongly recommend, but want more myself.

More political than I expected.

This is an empowering read. It contains a lot of background and analysis but also plenty of tips on how to have positive discussions and be part of frame building.

If you're looking for clarity on liberal thought and how linguistics can assist in conveying liberal ideas then this is for you.

I like that this book helps me deal with people who I know try to trap me with Fox and sky news arguments. Thanks so much