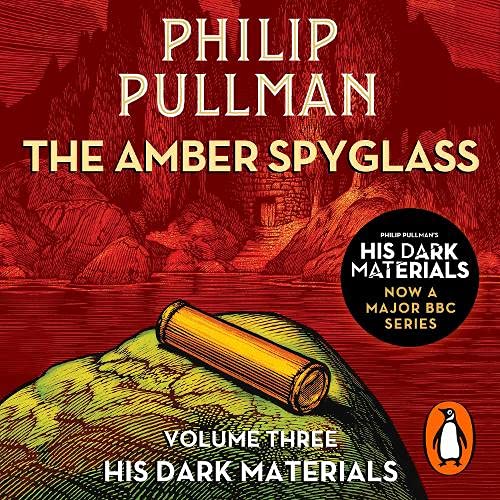 From the world of Philip Pullman's His Dark Materials - now a major critically acclaimed BBC series.

Will and Lyra, whose fates are bound together by powers beyond their own worlds, have been violently separated.

But they must find each other, for ahead of them lies the greatest war that has ever been - and a journey to a dark place from which no one has ever returned....

Read by Philip Pullman and a full cast of narrators.

What listeners say about The Amber Spyglass

Really good narration and performance. The story for me though didn't flow as easy as the other two. It is the culmination of so many characters and stories coming together so it feels sometimes that it doesn't breathe. really nice and entertaining though overall

Very entertaining and well preformed by all the cast, however the story falls off a cliff in the last 2H! so disappointed as was great up to then

Awesome in The Truest Sense of the World

I would like to thank Penguin very much for producing such an amazing rendition of all the three books of his dark Materials trilogy. Philip Pullman reads it beautifully. I first read the trilogy years ago and loved it but when I listened to this recording it brought the books to life. The story is so psychedelic and surreal. No words can truly describe how absolutely outstanding this trilogy is.
However, I am deeply disappointed that the actors who played their parts beautifully were not credited. I would’ve loved to have known who played each part. PLEASE rectify this.
Listen to this recording. You will NOT be disappointed.

Amazing story. Deep in meaning, brimming with adventure. I loved this story and the two previous books.

Great series, enjoyed all three. Spoilers, would have liked a bit more detail for what happened to some of the minor characters, other than that a great listen. Very well performed.

Absolutely love this series. The full cast narration is really enjoyable and easy to listen to.
The Amber Spyglass is my favourite book of the series.