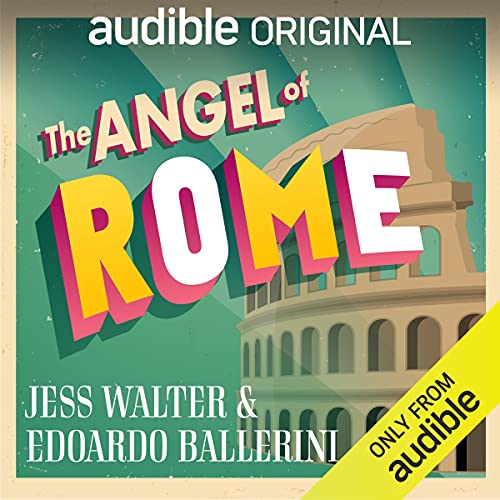 The Angel of Rome

A young American studying in Rome gets swept up in the glamorous world of cinema when he meets a beautiful Italian actress near the end of her career and an irrepressible American TV star hoping to revive his.

In this romantic and comic story about class, language, and the art of reinvention, “Nebraska Jack" Rigel is about to quit his Latin studies program at the Vatican when he suddenly finds himself face-to-face with the mysterious and ethereal Angelina Amadio, the famous Angel of Rome. Hired to translate the romantic feelings of the unpredictable former TV detective Ronnie Tower, Jack must navigate these two forces of nature in a Rome of late night bars and fancy villas, as he searches for his own role to play.

What listeners say about The Angel of Rome

What a lovely little story! Jess Walter has made me a fan. And what to say of the great Edoardo Ballerini, nothing would suffice.

I absolutely loved it.The vocalizations were excellent,, they were very diverse and enjoyable. The entire story had me laughing out loud. It was funny yet very poignant. I wondered how much was true and had to look up the movie The Feeding . It was real and there was even an actress named Kara Maria Amedon! I
I did not want the story to end. I love my experiences with Audible.

Too marvelous for words

I immediately downloaded this book when I saw Jess Walter’s name. The combo of author, and narrator, Ballerini, kept me up all night laughing and crying.
Thanks to all who share in bringing The Angel of Rome to the Audible audience!

A thoughtful and fun exploration of friendship. I must write that there are some funny laugh out loud sections regarding translations. Short but tightly woven. I will remember it.

I have listened to a few podcasts that have had me screaming with laughter and this is not one of them....this story was more of a romantic drama...kinda of like one of those old Italian films or a Barbara Streisand movie....I liked and I would revisit it again when ever I'm in a romantic mood

A story that uses cute but not corny plot devices to show how we can come to understanding of who we are and how we can become
who we are meant to be.

I loved this charming, funny story! The narrator was wonderful and very good at performing many different characters and accents. I only wish it had been longer.

This was a really fun listen. The charterers were colorful but thoughtful.
Contemporary and classic. Great for an afternoon stroll

Short, but well done with an interesting and unexpected story line. I highly recommend it!

Short, sweet, funny, vivid and even thought provoking.
The writing is good, the plot moves fast and the narration is excellent. Really enjoyed this to hours adventure!

It's the kind of feel good heart warming story you want to listen to before falling asleep with nice warm fuzzy feeling. Really enjoyed it.

Short story so only 3 stars. Entertaining, lots of laugh out loud moments.
Recommend if your looking for a quick read.

Lessons in Latin, and How to Write

A short story, full of ideas on how you can reinvent yourself to achieve your best self.

A series of happy accidents, takes a callow youth, whose only joy is in old films, to find his true vocation.

I wish I had read this much earlier in my life.

loved this!! A Short story, but with such depth. Great narration, awesome story, highly recommended.

Loved this from start to end. Witty, quirky and thoughtful. Great narration and interesting characters.

So slow to get going, but then it just went nowhere! Pleased it was only short!

I really enjoyed my visit to Rome via this audible. Beautifully spoken by one of the authors it seems he lived it. Loved the characters.