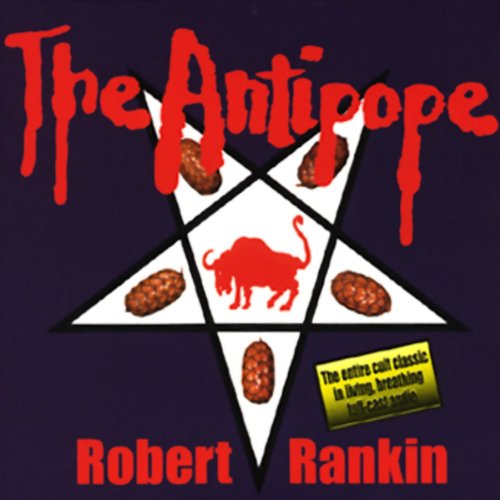 "Outside the sun shines. Buses rumble towards Ealing Broadway and I'm expected to do battle with the powers of darkness. It all seems a little unfair..."

You could say it all started with the red-eyed tramp with the slimy fingers who put the wind up Neville, the part-time barman, something rotten. Or when Archroy's wife swapped his trusty Morris Minor for five magic beans while he was out at the rubber factory.

On the other hand, you could say it all started a lot earlier. Like 450 years ago, when Borgias walked the earth.

Pooley and Ornally, stars of the Brentford Labour Exchange and the Flying Swan, want nothing to do with it, especially if there's a Yankee and a pint of Large in the offing. Pope Alexander VI, last of the Borgias, has other ideas.

What listeners say about The Antipope

A hilarious parody of Lovecraftian horror. The humor is whimsical, over-the-top, and very British. Would've given it five stars if not for the overuse of sound effects; those got pretty irritating after a while, but certainly weren't bad enough to keep me from enjoying the rest. The voice acting was delightful.

A very good book. The voices were excellent but the sound effects did get a bit irrating though not near enough to stop listening. It reminds me some what of Douglas Adams with a little Agatha Christie thrown in for good measure.

Not a fan of the dramatic reenactment

I listened to a lot of more recent Rankin books and am now starting from the beginning. I’m really not a fan of the sound effects, multiple readers and general reenactment style of this book. I am glad he dropped this style because his narration alone is marvelous.

I cannot say that I’ve read anything that has made me laugh quite so much or so well! It’s as if Wodehouse has a few pints and decided to take a stab at fantasy. I usually prefer reading text but the voice actors really add to the story. Well done! Looking forward to the rest of the trilogy!

I first read these books is the 80’s and it was great to revisit the Antipope on Audible. Well performed and as entertaining as I remember.

I found the sound effects fun

it was like listening to a radio show, but a full book. the narrator's are all really good too.

The added soundtrack was distracting.

I found the added sounds distracting. Frankly if your book needs to have a soundtrack instead of just reading the book then maybe the author should work on describing the atmosphere more. After about a half an hour in I felt the plot was going nowhere and I had no attachment to any of the characters, and decided not to waste any more of my time.

This was a really good listen. Strange and quite silly in parts. Particularly like the cowboy theme night.

Clearly read, acted and so on. Very good and very funny.

The book is in the vein of Douglas Adams or Terry Pratchett but in the occult rather than sci-fi or fantasy. A friend recommended this book a long time ago and I never got around to getting a copy. Browsing audible I saw it and thought I would give it a try. It was an excellent choice on my part, which shows I do make some occasionally. It is well written and superbly read, with wry, dry humour and characters that don't just live but are likeable, and I really wanted to see how it would pan out. I subsequently got 'Hollow chocolate bunnies of the apocalypse' which I also enjoyed. In a publishing world where clones of success swarm, Rankin and his work stand apart. You get the idea that he is a genuine story teller who wants about all to entertain, which certainly does. The only negative comment is that none of the rest of the series are available on audible. If they do become available I will be the first to buy.

For the love of God, no more backing music

No audiobook needs to have a backing soundtrack. Enjoyed the story, the acting, but the backing music is just distracting.

I tried reading this several years ago, and got nowhere.
But this audio version was a joy. Unusually for an Audiobook - it benefitted from being read by the author. He has a great use of language and I don't know that anyone else would do it justice.
What's really special about this audiobook is that although it's a full and unabridged transcription, every bit of dialogue is acted out, by actors who sound fully engaged in what they are doing.
It was a real pleasure.
OK, some of the story is showing its age now, and some of the sound effects were a bit jarring, but it's well worth a credit to get such a well polished production.

I have missed reading Roberts books, to be honest id forgotten how enjoyable and funny they are and to have the legendary Pooley and O'Mally actually talking to me was great. I am dyslexic and Roberts books were some of the only books I have read, kept me interested and wanting to keep reading no mater how hard. The antipope was the first I read 10 years ago and was overjoyed that I found it on audible and look forward to reading more, found the brentonicon so thats next .

Love the story but narration is painful

I love Rankin - he's whimsical stories and eccentric wondderful characters. This is a great little tale. The performances on the whole were pretty good but - i hate to say it - Rankin's narration is hard to get through... maybe because we have been treated since he did this to professional voice artists across the board... but the intonation is really grating and all over the place.

Read this one. ideally REMAKE this one please!

felt like an amateur production. No pace no wit no timing. can' bear to continue

While the sorry, on the face of it is interesting, the writing witty in places, and the narration adequate, it combines into something that just seems laboured. The narration isn't that bad, but it's too forced, as if the narrator is trying to make sentences seem more dramatic than they are. The dangers of an author doing a narrator's job I suppose.

I cranked this one up to 1.5x speed, and it still dragged. Somehow the whole is less than the sum of the parts.

Not perfect by any means, but manic and fun, and once I got over the characters not sounding exactly as they should have (in my head obviously) it settled down into a really good version of the better kind of lunacy that Robert Rankin offered before I gave up reading his stuff as he seemed to me to have followed Terry Pratchett into formulaic writing (for which I don't fault him in any way if he truly has, at the end of the day its what ever pays the bills and why kill off a golden goose?)

Unable to listen to more than 20 mins due to the irritating sound effects, lamentable narration which was somehow a mixture of wooden and overly dramatic acting. Story may well be good but just couldn't get past the performance.

Part 1 of the Brentford Trilogy

What a load of old toot! Still, there’s many a slip between pint of Large and lip.