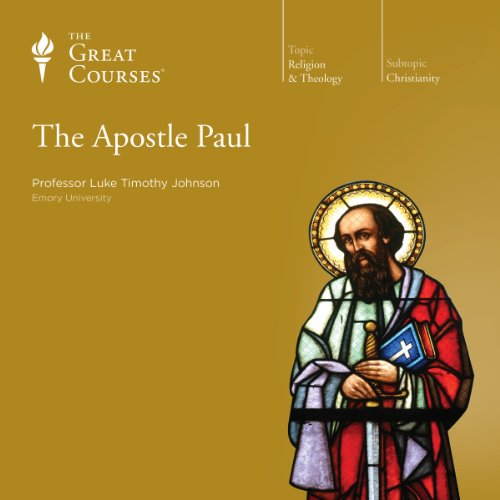 Coming to grips with Christianity means coming to grips with Paul. There is no figure aside from Jesus himself who is more important to the history of this world religion, and no figure from the age of the early church about whom we know more or of whom we have a more rounded view.

Historian Luke Timothy Johnson, the best-selling author of The Real Jesus, offers a fresh and historically grounded assessment of the life and letters of Christianity's "apostle to the Gentiles" in this 12-lecture series.

"One of the most fascinating, important, and controversial figures in the religious history of the West, Paul the Apostle continues to find champions and detractors, sometimes in surprising places," says Professor Johnson.

You consider his letters to the Thessalonians, Corinthians, and Galatians. You explore his religious commitments as a member of the Pharisaic movement, his persecution of the Christian sect, the dramatic experience that changed him into an apostle, and his work as a missionary and church founder.

What listeners say about The Apostle Paul

I listened to a number of Great Courses on Christianity, and I always get the most out of Luke Johnson's. I was hesitant to spend a credit on a 6 hour course, but it was well worth it. I learned much I didn't know about Paul and learned much context.

I can't believe this guy gets paid to teach this nonsense. I was looking for facts not liberal politics. This item should be listed as fiction.

A Revealing History And Study Of Paul

What made the experience of listening to The Apostle Paul the most enjoyable?

Professor Johnsons detailed and enthusiastic presentation has raised the curtain for me on the Bible. I feel like all those many and dis-jointed verses I have studied over my life have been synthesized into a context I never truley understood. His suggestion to ListeN to The Acts and Paul will allow better understading I can say is the best advise i have had. With each of his lectures I was able, through Audibe, to have access to Gregory Pecks narration on the new testament with the only version of the Bible I trust - The King James. By listening to the lectures and Mr, Peck is of tremendous value for me. I feel I have found the lucky dime.

It was a privilege to stand as a student in this classroom and listen to a man whose intellectual capacity and eagerness too teach is as evident as my long, gray hair and worn-out shoes. Thanks Prof!.. I'm anxious to listen to the next lecture.

Good overview of Paul and his works.

What made the experience of listening to The Apostle Paul the most enjoyable?

There is plenty of content here for someone without prior reading or lectures on Paul. The lectures revealed a large amount about him as a man which has helped me feel closer and understand where he is coming from in his writings. This made the experience worthwhile and enjoyable for me.

What was one of the most memorable moments of The Apostle Paul?

When it really sunk in that Paul truly did expect Jesus Christ to return in his lifetime. It's obvious in his letters that he believed this but it never really clicked until I could visualize him better as a once living, breathing man and less as a slightly vague character in writings from 2000 years ago.

Have you listened to any of Professor Luke Timothy Johnson’s other performances before? How does this one compare?

This was the first course that I have listened to from Professor Johnson. His performance was overall enjoyable to listen to. I have heard more energetic and charismatic presenters in The Great Courses lectures but I would not hesitate to buy another course taught by Mr. Johnson.

Not necessarily a moment but all of the insight into Paul as a man. Even someone that was so important to the spread of Christianity didn't have all of the answers and had his own personal struggles. The way he is presented here just helps bring him to life whereas in the New Testament people can seem more like characters in a story rather than individuals that lived, breathed, loved, and mourned.

Professor Johnson holds a different view on the commonly held scholary belief that most of Paul's writings were actually not his at all. His reasoning behind attributing all of these writings to Paul allow for me to believe without just blind faith and accepting church tradition that Paul truly did write the letters or in some instances gave his approval on letters written by people under him therefore taking responsibility for the content. This, he believes, is the reason for variations in writings styles found in the different letters. He also points out that the letters were never intended by him to be church doctrine by being included in a bible, so he would have been slightly less careful in making sure that all letters complimented one another seamlessly. Not to mention his personal ups and downs over the years and the fact that the audiences of the letters had very different cultures from one another all affected the different styles and wording of his writings. All in all, these lectures gave me peace of mind in accepting his traditionally accepted writings as truly being his, whether he personally penned them or not.

Absolutely, a very objective and insightful survey of a significant historical figure.

Since Paul's letters do not provide an obvious narrative, it was interesting to see how the lecturer approached the subject and the various themes he distilled out.

What does Professor Luke Timothy Johnson bring to the story that you wouldn’t experience if you just read the book?

His cadence and inflection added a lot of meaning to what would come off as very dry and abstract on the page. Like the letters themselves, meant to be spoken and not read!

What would have made The Apostle Paul better?

The author managed to tease out a negative interpretation of scripture.

What was most disappointing about The Great Courses and Luke Timothy Johnson ’s story?

The assertion that Paul's only interest in writing the epistles was to dupe his readers into raising money for him.

This professor knows his stuff so well it was just pure interest and an amazing look at a person vastly misunderstood.

Course full of info about Paul

If you are a believer and you are seeking to understand why you believe what you believe this is a good listen. The teacher is knowledgable and easy to listen to. You will gain insights into who Paul is, a greater understanding and purpose of the letters he wrote.

Very thoughtful. I will keep and listen again. The author is thought provoking and has a good voice and vocabulary for an intellectual piece like this.

A Great Introduction to Apostle Paul

A thoroughly stimulating and enjoyable course, presented by a knowledgeable and engaging lecturer, who provided well-reasoned and balanced opinions.

A good overview of scholarly views on Paul

A useful overview of scholarly views on the apostle Paul. I felt a few times Johnson said something was clearly the case, but he has not demonstrated that it was. I didn't realise that Johnson thinks the pastoral epistles (1&2 Timothy and Titus) are authentic.
Here are the chapters:
1 An Apostle Admired and Despised
2 How Should We Read Paul?
3 Paul’s Life and Letters
4 Problems of Early Christianity
5 First and Second Thessalonians
6 Life in the World—First Corinthians
7 Life in Christ—Second Corinthians
8 Life and Law—Galatians
9 Life and Righteousness—Romans
10 Fellowship—Letters from Captivity
11 History and Theology
12 Paul’s Influence

brilliant this guy knows his stuff very pleased with it and even better if it was longer ! thanks

This is a truly scintillating work

I found this audiobook of the very highest level of academic expertise.

What was one of the most memorable moments of The Apostle Paul?

Although the treatments of the various epistles is thorough and thought-provoking, I was especially struck by that of the letter to the Romans.

What does Professor Luke Timothy Johnson bring to the story that you wouldn’t experience if you had only read the book?

The oral presentation by Professor Johnston is absorbing.