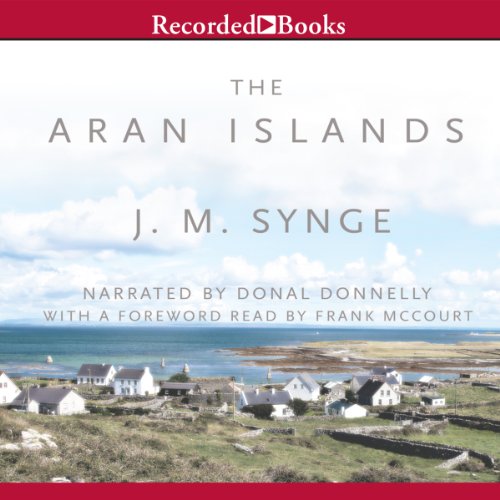 The Aran Islands are a tiny cluster of Irish-speaking lands off the western coast of Ireland, far removed from Ireland’s cultural and literary center. John Millington Synge, one of the wild boys of Irish writing, took a trip to the islands in 1898 on advice from William Butler Yeats. Soon after, he published "his first serious piece of work", this memoir of life on the traditional islands.

Performed in a beautifully rolling Irish tenor by Donal Donnelly, The Aran Islands treats the listener to "long-legged pigs...playing in the surf", sweeping fogs, and a cast of unforgettable, rustic characters. A fresh memory in its time, The Aran Islands now has the whisper of elegy. Don’t skip the introduction by the late contemporary master, Frank McCourt.

J.M. Synge, one of the greatest English language playwrites of the 20th century, immortalized the Aran Islands and its people with vivid written portraits that are among the greatest in modern literature. Synge’s vibrant language and earthy themes breathtakingly capture the folklore and way of life that has since perished on these remote northern islands. As an aspiring writer in 1897, Synge was commanded by William Butler Yeats to, “Go to the Aran Islands. Live there as one of the people themselves; express a life that has never found expression.” Synge captures his first four visits to the islands in this magical book. However, their influence continued to permeate his work, including The Playboy of the Western World. Filled with the exuberant energy of an artist coming into his own, The Aran Islands provides an unforgettable look at a land that holds Ireland’s ancestral language, culture and uncorrupted heart. Synge’s lyrical glimpses into the past, coupled with Donal Donnelly’s rich, lilting voice transports listeners to these tiny Emerald Islands.

What listeners say about The Aran Islands

A glimpse of civilization's primitive past

This book is a very dark glimpse into a dying world that once existed through all of human civilization. Fairies and giants and ghost ships are as much a part of these people's real world as is God and the police who come onto the islands to kick people out of their homes.

I do wonder, however, what Synge's intention was to portray these people as being so simple. He does admire their skill with the boats but he spends so much time with old men who tell tales that have no point that it's easy to think the whole island lives and thinks as these old men do. Yet the young men, Michael in particular, leaves the islands to find work elsewhere because he knows there is no future on those grey, wet rocks. And the other danger is that we get pulled into a nostalgic portrait of the islands that never really existed outside of the imaginations of these old men.

Still, there are moments that are quite beautiful and telling as to how things really are on the Aran Islands. First is the priest, whom we never meet but are always told about braving the rough sees day after day and risking his life as he tends to his flock. Though we never meet this man, I couldn't get the image out of my head of a man dressed in priest's black, standing upright on a small boat tumbling upon the waves in a fierce gale. I would love to have heard his story. The other telling moment was for the funeral of the young man. This was a beautiful and very sad scene where they bury him in the same spot where his grandmother had been buried and they find her skull among the black planks on her coffin. This image, coupled with the young man having lost his head at sea, is a wonderfully confusing image where the nostalgic sensibility of the old is placed on the dead body of the young that can't carry it to any future other than the grave.

Perhaps this is why all the stories end with absolutely no point because life is, to them, pointless. Life is hard, the women wear out in childbirth before they're even 20, the men drink and fight and die at sea for a pittance of a catch, or the lucky ones move to America and never come back, their story unfinished.

A lovely story of life on the Aran Islands. After visiting West Ireland and the Aran islands a few years ago, I have been dreaming of going back. This book paints, in great detail and affection, what life used to be like on these islands. With this great additional knowledge of the local traditions, stories, geography and architecture I look forward even more to my trip back later this year.

I loved this book from beginning to end. The people are portrayed in such a loving manner.