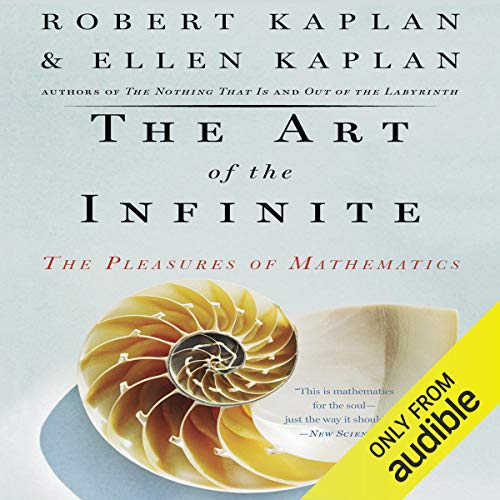 The Art of the Infinite

The Art of the Infinite takes infinity, in its countless guises, as a touchstone for understanding mathematical thinking. Robert and Ellen Kaplan guide us through the “Republic of Numbers,” where we meet both its upstanding citizens and its more shadowy dwellers; and transport us across the plane of geometry into the unlikely realm where parallel lines meet. The journey is enriched by deft character studies of great mathematicians (and equally colorful lesser ones). And as we go deeper into infinity, we explore the most profound mystery of mathematics: Are its principles eternal truths that we discover? Or ones that we invent?

This was an audiobook that I had not expected to be in literary performance. However I was pleasantly surprised in the performance of the audiobook! It became quite a beautiful literary interpretation of all of mathematics.
Something unexpected occurs in chapter 6 of the Audible audiobook at the 7:40 section. You get to see the inner workings of the audiobook being performed by the narrator. Apparently a section of bloopers audio was not clipped out when it should have been. Still it was a great performance and I learned a lot.

Ray Chase gives superb narration to a sometimes challenging text. The story and explanations of classic results in mathematics are both poetic and illuminating. Immensely enjoyable! Some editing glitches however.

Difficult for the ear...

most likely better seeing than hearing, and occasionally the lists of various things gets monotonous.

Would you try another book from Robert Kaplan and Ellen Kaplan and/or Ray Chase?

Probably not. This book is probably better than the audiobook. I could see this being assigned reading for a high school math class, to try to bring the subject matter to life for students, but I found it very hard to get through. Still haven't finished it.

What could Robert Kaplan and Ellen Kaplan have done to make this a more enjoyable book for you?

I was expecting more backstories to the mathematical concepts involved. Instead, it read more like an ode to math - how I love thee, let me count the ways.

I may not have read the book summary closely enough. In any event, not what I expected and came away disappointed.

Sing-songy narration to a saccharin book...

(1) Refrain from cheerleading. If someone already loves a topic, you don't need to do this; if someone doesn't, it can frighten/annoy them out of being open to it. (2) The song "one potato, two potato..." is sung to small children because any discerning adult would probably punch you in the face if you subjected them to it. This is an audiobook singing "one potato, two potato..." which is directed towards an adult audience. No pun intended...you do the math.

Would you ever listen to anything by Robert Kaplan and Ellen Kaplan again?

Not unless I somehow felt overcome with the desire to hate math. I don't see this happening because I love math and I find that this feeling of affection helps to offset its difficulty when dealing with it in life.

His reading started off sing-songy and was slightly undesirable. After time, this became irritating. Then, when he actually sung "one potato, two potato..." in probably the most annoying, rage-inciting way I can think of, that was the end of my being open to performances by this narrator. Note that I am normally a very patient person. It's just that this saccharin, sing-songy tone of his is particularly bothersome to me.

What character would you cut from The Art of the Infinite?

Does infinity count? -- This is not a character-driven book, not that I could tell from all of the five or ten minutes I could stand it. As a side-note, perhaps Audible would consider making these Mad-Lib-esque review boxes in a variety that suited non-character-driven books...you know, seeing as they sell them...

When the sing-songy narrator started singing "one potato, two potato..." in this saccharin tone and I caught myself contemplating jumping out the nearest window, I had to stop listening. Now, I love math, so this should say a lot. I would not recommend this audiobook to anyone with an ability to hear -- no matter how slight. If you wish to incite a deep hatred of math, subject them to this audiobook, rinse, repeat, then buy a new electronic device because they don't fare well in water.

A comprehensible rendition on counting and infinity

Beautifully narrated and punctuated by quotes from all sort of esoteric sources. It delves into some moderately heavy geometry and number theory, perhaps needing the included visuals. If you are moderately mathematical you will enjoy - it is almost a form of mathematical poetry,
With some amusing descriptions of the mathematicians involved ..

A riveting view of some mathematics history

The most romantic and inspiring mathematical novel to inspire amateurs and pros alike. Beautifully crafted and narrated. Recommended only if you do have a mathematical curious mind, even if one with little training in the matter.

Drags on and on

I am personally very interested in mathematics so thought this would be for me but it labours on the same point again and again and is performed in such a wishy washy manner. I wouldn't recommend this

An infinity of ones if it won't delete

I finally gave up

I really tried, but eventually, it just got too much. Loved the subject matter, but found it too hard to follow just by listening. I enjoyed just letting it wash over me, but despite loving mathematics, I didn't have enough behind me to be able to keep up without the material in front of me. Never mind. I certainly wouldn't denigrate the book, and since I didn't manage to finish it, I can hardly provide a comprehensive evaluation.

Better to be in print form I think.

Did The Art of the Infinite inspire you to do anything?

Yes, I'm still interested in math and I did learn a few things. I'll keep on going.

Thanks for a great book. I'm sorry I wasn't up to it.