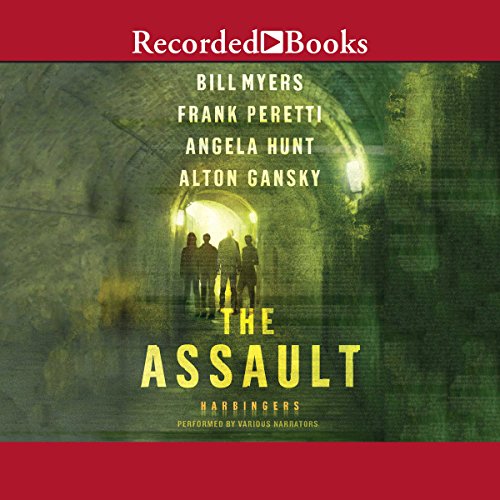 In cycle two of the series, the Harbingers team investigates more unsettling mysteries that drive them to the breaking point. Will they be strong enough to keep overcoming the world's dark forces? Fast-paced and ongoing, this thrilling collection is like your favorite TV series, with each linked episode written by a talented author.

The next wave of stories in the Harbingers Series arrives.

Cycle two of the Harbingers series continues the story of four gifted strangers brought together to fight a growing darkness.

In Bill Myers' "The Revealing", the team finds themselves in Rome trying to retrieve the mystical spear Hitler once owned - the very spear that pierced Christ's side. This task will take them from hidden chambers inside the Vatican to a mysterious seaside cave with powers they could never expect.

Frank Peretti's "Infestation" unleashes a microscopic evil on the world that deceives, blinds, kills, then spreads. The Harbingers team must confront a monster bent on seducing and destroying mankind.

In "Infiltration" by Angela Hunt, the team is wounded and barely holding together. Forced to split up, they realize their investigations have led them into dangerous waters.

Alton Gansky's "The Fog" unleashes a supernatural mist unlike any other. There are vicious things in the fog that kill whatever they find. One team member realizes that the ultimate sacrifice may have to be made.

What listeners say about The Assault

I am a long time fan of Frank Peretti. I have only just discovered the Harbingers Series and am enjoying them very much.

That being said, It is my understanding that the character "Brenda" is African American and has grown up in an urban/inner city area. Her character's narrator should work on the character's vernacular. Cycle 2 is an improvement over Cycle 1, but there is still a lot of work to be done.

I enjoyed all the stories.

Since this appears to be religion meets sci-fi fiction. I truly did enjoy what I read. Those that like this type of genre, will enjoy this book. There are some serious parts but it’s entirety It is not to be taken serious. As I said I enjoyed the reading.

Loved the whole series! Best collaboration I've listened to both in the writing and narration!

The world is our world

The cosmic forces at work in our world are not imaginary. Though this is a work of fiction, the events of earth since 2020 give a stark reminder that sometimes fiction mirrors reality.

An exceptional group of authors make an ok story.

Couldn't "put it down"

To say I enjoyed this would be an understatement. I'm really enjoying these books from some of my favorite authors writing together. It was like Christmas when I found out that they existed. This set of books didn't disappoint at all. The narration was great and the storyline hooked me for sure. Highly recommend!

Another good book in the series

Good easy reading-listening, interesting stories and entertaining as well, however, I find the requirement of 15 words to submit a review to be overly tedious.

Another great set of stories

I have loved these short stories. I feel like the characters have developed well and it is easy to get connected to them (even the professor). I am starting book three today!

Absolutely riveting and thought provoking. Is definitely everything I would expect from Frank Peretti and has sent me on the path to new authors.

I love this series but the narrator in the third story has the worst Scottish accent I have ever heard ... it is ruining the story for me. I can hardly wait for it to be over ...

Great story, but disappointing not to be able to purchase the next in the series