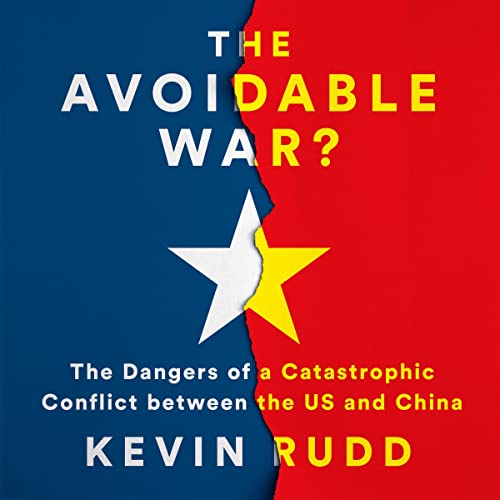 A war between China and the US would be catastrophic, deadly, and destructive. Unfortunately, it is no longer unthinkable.

The relationship between the US and China, the world’s two superpowers, is peculiarly volatile. It rests on a seismic fault - of cultural misunderstanding, historical grievance, and ideological incompatibility. No other nations are so quick to offend and be offended. Their militaries play a dangerous game of chicken, corporations steal intellectual property, intelligence satellites peer, and AI technicians plot. The capacity for either country to cross a fatal line grows daily.

Kevin Rudd, a former Australian prime minister who has studied, lived in, and worked with China for more than forty years, is one of the very few people who can offer real insight into the mindsets of the leadership whose judgment will determine if a war will be fought. The Avoidable War demystifies the actions of both sides, explaining and translating them for the benefit of the other. Geopolitical disaster is still avoidable, but only if these two giants can find a way to coexist without betraying their core interests through what Rudd calls “managed strategic competition.” Should they fail, down that path lies the possibility of a war that could rewrite the future of both countries, and the world.

“A lifelong student of China, Kevin Rudd has become one of today’s most thoughtful analysts of China’s development. The Avoidable War focuses on the signal challenge posed by China’s evolution to America and to world order. Can the US and China avoid sleepwalking into a conflict? Rudd offers constructive steps for the two powers to stabilize their relations.” (Henry A. Kissinger)

“Wise counsel from a seasoned statesman who recognizes the real risk of catastrophic war and illuminates a promising path the US and China could take to avoid it.” (Graham Allison, Douglas Dillon Professor of Government at the Harvard Kennedy School, and author of Destined for War: Can America and China Escape Thucydides’s Trap?)

“An extraordinary tour de force that analyzes the most important geopolitical relationship of the 21st-century. Organized, like Dante’s Inferno, into concentric circles that describe in brilliant detail the challenges ahead and a timely prescription to avoid a catastrophe. Let us truly hope that we can indeed avoid a war that looms upon us like a dark tower, threatening all the progress we have made.” (Admiral James Stavridis, 16th supreme Allied commander of NATO, former dean of the Fletcher School of Law and Diplomacy at Tufts University)

What listeners say about The Avoidable War

Excellent Review of China. But, the US?

I like this book by Kevin Ruud very much. He mentioned towards the end that the audience is American - primarily. This is a shame because the world is interconnected and many people may want to understand the American perspective in some depth.

His analysis of China through the circles is perfect. This is an excellent way to understand how China is changing and how Xi Jinping is changing China. Kevin Ruud has explained some of the risks facing China and Xi Jinping.

His analysis of the USA is shallow and imperfect. While he claims to be impartial, I think he is partial to his adopted land. While he acknowledges Americas's strengths and weaknesses, the analysis is superficial. We do not understand America and what prompts the Americans to be so aggressive.

I think the concept of 'managed competition' is weak. Who will manage it? How? Who will judge when either side breaks the rules, and what influence will they have?

By far the best book on China

You may not agree with the 10 concentric circle framework, personally I think it helps the structure of the book more than the analysis itself, but the content is first rate. As a Chinese reasonably literate in domestic politics, I am impressed by Mr. Rudd’s insights. Highly recommended if you want to improve your odds in getting the next decade right.

Xi and the CCP Approve this Message

Tough to listen quietly to 16 hours of a relatively one-sided, pro-China spin on geopolitics. Nevertheless, I respect the author's contribution here, and I did what I could to learn from the author's experience and insight into the Chinese worldview.

I wish the USA had moral high ground to reproach the criminal ambitions of the CCP. I can't point to the United States of today and say that she is without some of the very same tendencies towards totalitarian rule and self-serving deception.

However, the CCP is given a pass at about every turn in these pages. The Uyghurs and Xinjiang, nothing really much to talk about there. As long as China prevails, they will never have to answer for it. Intellectual theft over decades in the West, ehh, there are some allegations. The Belt and Road Initiative, meet the CCP's new superior method of investing in the third world and providing humanitarian aid. Some of the most oppressive policies anywhere in regulating speech and the internet. Why not let Huawai and the CCP be the gatekeepers of 5G and the future of the digital communication? The social credit system, just an ambitious project on the cutting edge of merging man and machine. China's relatively new seat at all the big tables in global affairs, we should all trust that Xi and China are looking out for the betterment of humanity. Etc...

The USA is flat-footed, confused, myopic, delinquent, etc. on about every point in contrast to China's superiority.

Again, I wish the USA was in a better place and had better leadership. But this narrative reads like a big excuse for why we should feel sorry for China's past, why the world should sit idly by and let China continue steamrolling ahead into a brave new world. For all the work this author put into outlining China's methodical approach to moving the needle in her favor, he says, We don't know for sure what the end game is should China assume supremacy. China will probably figure that out when that happens. Another pass for the CCP. Please find me a passage in this work that the CCP would take great offense to. It seems Rudd was deliberate in being careful not to say anything that would upset the party.

This is a must read book

As the tension rise between the USA and CPR and ratchet up in a dangerous way a more widespread understanding of what the thinking and capacities on both side of the divide is critical for the human race’s continuance and no better person to impart this than Kevin Rudd. Twice Prime minister of Australia. As a fluent Mandarin speaker who has sat down with Xi and can read CPR policy papers and knows America’s ever lurching policies towards the CPR just as well he is some one who writes with authority, gravitas, and hope. My two years working in China working for an American Company between 1997 and 1999 leads me to think his words ring true. I also share his affection for the Chinese people. For me as a proud if circumspect American I have a great affection for the human race as a whole and hope fervently for it’s survival. This book and the thinking and fact collection it represents is an important step in the direction of human global survival.

Crucial reading for the coming decades

This is a thoroughly researched, articulate account of historical, contemporary and future considerations for the relationship and international impact of Chinese and American policy and behavior. Most significant are the recommendations by author Kevin Rudd to avoid the unimaginable consequences of war.

Expert sinologist and former Australian Prime Minister Kevin Rudd has written a stunning tour de force on developing Chinese foreign policy under Xi Jinping and the existential challenges it presents for Asia, Europe and the US. Rudd narrates the book and is fluent in Mandarin so there are none of the amateurish mistakes one sometimes encounters in audiobooks on China.

Rudd starts out by outlining the key ten concentric circles of current Chinese policy which include, fundamentally for Xi, staying in power personally and keeping China under tightened control of the Chinese Communist Party and an increasingly authoritarian surveillance state which has deemphasized and even prohibited talk of human rights and democracy. Rudd makes crystal clear Xi’s goals in a way that is hardly subject to dispute and lays out a remarkably thoughtful and well considered analysis of Xi’s future plans which include building a Chinese military that can defeat the US in combat in Asia, can retake Taiwan even if defended by the US, Australia and Japan and extending China’s maritime presence in the South and East China Sea to the exclusion of all other countries which might challenge its power.

Rudd points out that after Xi is confirmed as effective dictator for life at the November 2022 Party Congress, Xi expects to move advance his military goals toward reclaiming Taiwan in the late 2020s or early 2030s when he is still in power. At the same time, China has through its Belt and Road projects and numerous Asian diplomatic and economic and UN initiatives filled the power vacuum left by the US’s abandonment of its traditional international commitments and role to form new alliances from which the US is effectively excluded.

Rudd also outlines in detail the tremendous damage done to the US international position and diplomatic alliances by the US government’s chaotic withdrawal or disruption of its international alliances under the Trump Administration’s grotesque diplomatic incompetence which left in tatters so many important prior US alliances. The damage has been irreparable but the US still has some opportunities to strengthen new alliances like the Quad to restrain Chinese expansion. But we are far behind both in planning and execution of the necessary steps to prevent China from pushing out the US and becoming the world’s greatest power. It is not too late to respond, but the US appears to lack the determination and focus to do what is necessary while Xi is laser focused on getting what he wants and on pushing US power out of Asia.

At the end of the book Rudd outlines in detail what he sees as the necessary steps to protect Taiwan and contain Chinese power within reasonable limits but acknowledges this could easily be a losing battle. The defense and foreign ministers of every North American, European and Asian government should read this book. It is important and it is alarming.

This was an excellent explanation of the struggle between China and US. Kevin Rudd has written a book both informative and insightful.

If you are looking for a comprehensive explanation of the political strategy of China, this book is a great starting point.

Comprehensive but easy to understand and listen to

Truly an amazingly thought out and constructed piece of work. Kevi Rudd's experience and thoughtfulness in laying out this most important international relationship frames potential blueprints for the alternative futures of Sino/American relationships now and in years to come. Should be required reading for senior political and military staff in the US.

The ability to execute the proposed Strategic Competition model between the US and China, will require diplomacy from a respective friend.
Minus a joint collaboration, there will be a war.

An honest and well-balanced assessment of the challenges facing Sino-US relations with a suggested roadmap to manage conflicting interests and ward off possible Armageddon.