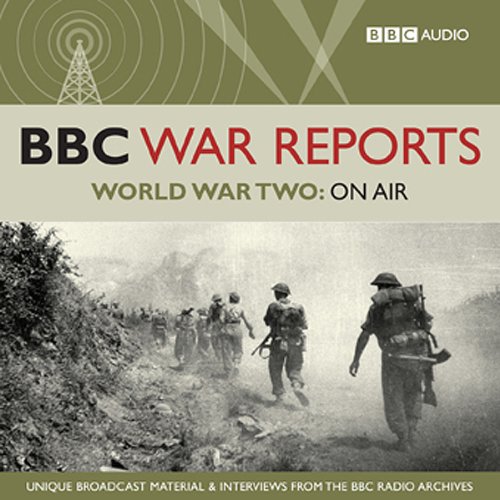 The story of the Second World War told by former BBC newsreader Richard Baker, with original recordings from the BBC. From Neville Chamberlain's historic declaration of war on Germany in 1939, to the sounds of rejoicing crowds on VJ Day in August 1945, the BBC - regarded at home and abroad as the very voice of Britain and the world's most trusted broadcaster - brought the full picture to an attentive nation.

This unique chronicle of war has the same rawness and immediacy as when the recordings were first broadcast over 60 years ago. It is both a testament to the BBC War Correspondents and a rare document in history.

Richard Baker is best known as a newsreader for BBC News; in 1954 he was the first person to read the news on television.

What listeners say about The BBC War Reports

This is perhaps the best purchase I've ever made on Audible. I've tried every conceivable genre of audiobook from poetry, to fiction, to drama to speeches and everything in between. But this collection of radio reportage from WWII era material is simply astounding. There are live broadcasts of battles occurring, with radio journalists doing their best to describe what is happening and other clips which stopped me in my tracks.

The material is woven together so well that there is no need for narration most of the time and overall the breadth of war time experiences one is exposed to in this documentary is so much more than anything you would hope for from a single audiobook.

I thoroughly recommend this and the companion volume The BBC War Reports: The Second World War: The Home Front. Together these works represent just about the pinnacle of radio documentaries and therefore top class audiobooks.

A wonderful treasure trove of wartime reports and human testimony. Brings these events to thrilling life in an engaging and accessible manner. Don't miss.