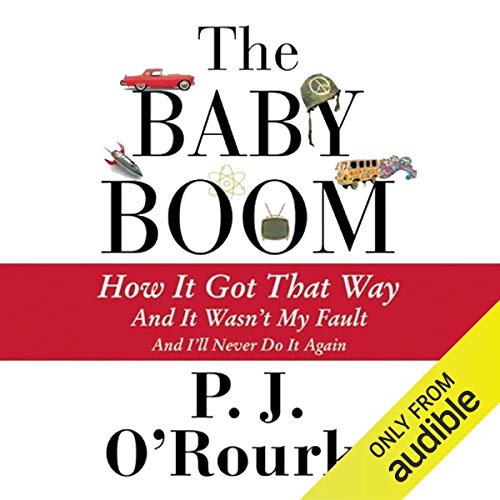 P.J. O’Rourke began writing funny things in 1960s underground newspapers, became editor-in-chief of National Lampoon, then spent 20 years reporting for Rolling Stone and The Atlantic Monthly as the world’s only trouble spot humorist, going to wars, riots, rebellions, and other "Holidays in Hell” in more than 40 countries.

Now O’Rourke, born at the peak of the Baby Boom, turns his keen eye on himself and his 75 million accomplices in making America what it is today. With laughter as an analytical tool, he uses his own very average, if sometimes uproarious experiences as a key to his exceptional age cohort. He writes about the way the post-war generation somehow came of age by never quite growing up and created a better society by turning society upside down.

The Baby Boom: How it Got That Way And It Wasn’t My Fault And I’ll Never Do It Again is at once a social history, a group memoir of collectively impaired memory, a hilarious attempt to understand his generation’s messy hilarity, and a celebration of the mess the Baby Boom has made.

"Dick Hill's deep and crackling voice fits perfectly with O'Rourke's sardonic prose as he explores the birth, rise, and retirement of Boomers over the last half-century. As Hill captures O'Rourke's self-mocking portrait of the self-righteous and self-centered Boomers, it's clear his performance trumps reading the book in print. His tone and emphasis nail every punch line. At the same time, Hill's timbre, with its hints of age, fits perfectly with the content. Listeners will find themselves laughing at line after line." (AudioFile)

What listeners say about The Baby Boom

This is not about the baby boom

Someone you wants to read an autobiography of PJ O'Rourke

Which character – as performed by Dick Hill – was your favorite?

This is an autobiographical work of PJ ORourke life as a child and college student, that is all. Yes it is funny at times, but it is many something some aging babyboomer writes in his diary. I was very disappointed, since Mr. ORourke may write goofy stuff but it is funny, this is mostly his remembrance of his early life. Sorry PJ but this is just not anywhere up to your usual stuff, I wasted one of my audible credits on this and several hours waiting to get to the good part, that never came, even if your college life was a lot more interesting than mine.

Self-indulgent, sappy, confusing. It sounded like it was written by an old man remembering his past in an emotional and confusing way. I'm only four years younger than the author and I barely made it halfway through the book. Very disappointing
for O'Rourke.

This is why you authors can't allow the publisher to pick the reader. This guy thought he was auditioning for Othello, not reading satire. PJ, next time pick one of your fans to read the audiobook. Maybe they would do your material some justice.

Maybe the print version... Love PJ O'Rourke's work, He really should be the narrator...

Would you be willing to try another one of Dick Hill’s performances?