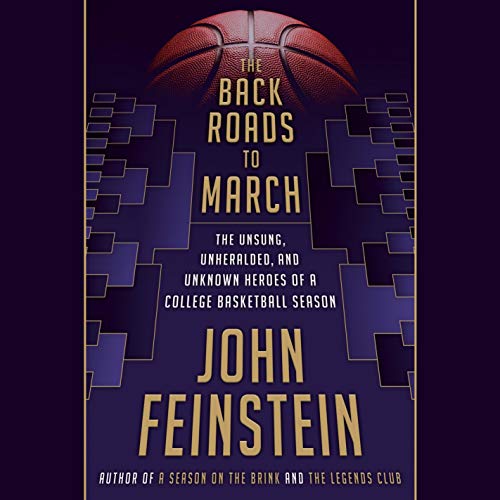 The Back Roads to March

Thirty years after changing the sports book landscape with his mega-hit, A Season on the Brink, number one New York Times best-selling author John Feinstein returns to his first love - college basketball - with a fascinating and compelling journey through a landscape of unsung, unpublicized and often unknown heroes of Division-1 college hoops.

John Feinstein has already taken listeners into the inner circles of top college basketball programs in The Legends Club. This time, Feinstein pulls back the curtain on college basketball's lesser-known Cinderella stories - the smaller programs who no one expects to win, who have no chance of attracting the most coveted high school recruits, who rarely send their players on to the NBA.

Feinstein follows a handful of players, coaches, and schools who dream, not of winning the NCAA tournament but of making it past their first or second round games. Every once in a while, one of these coaches or players is plucked from obscurity to continue on to lead a major team or to play professionally, cementing their status in these fiercely passionate fan bases as a legend. These are the gifted players who aren't handled with kid gloves - they're hardworking, gritty teammates who practice and party with everyone else.

With his trademark humor and invaluable connections, John Feinstein reveals the big time programs you've never heard of, the bracket busters you didn't expect to cheer for, and the coaches who inspire them to take their teams to the next level.

"In this fascinating history, sportswriter Feinstein (A Season on the Brink) takes a look at lesser-known college basketball teams. In order to explore the 'real joys of college basketball,' Feinstein eschews the big money and future NBA stars of celebrated universities to focus on the sheer love of the game that characterizes smaller schools, covering the 2018 basketball season from November to the March playoffs.... It's all net for Feinstein’s passionate basketball history." (Publishers Weekly, starred review)

"Rousing.... The author is a sympathetic observer, fan, reporter, and scholar all at once, and he delivers reams of information about how the game has evolved.... Feinstein writes with warmth and enthusiasm of a beloved sport in a book that will grab any fan." (Kirkus)

Good read for any basketball fan. I would highly recommend it. There is college basketball that is played under the radar

Another great book from John Feinstein

The 3rd book I have enjoyed of John Feinstein. His ability to tell a story and mix in the necessary background details was very easy to follow. I am a big college hoops fan and he provided more detail on the schools very few know about. Must read for a MCBB enthusiast.

Another Winner from Feinstein

Great book. Just enough humor sprinkled here and there. Factoids you'll neither hear nor read anywhere else. Thank you for taking the time to write this book and share your memories with us.

I enjoy John Feinstein books and I can feel his love for the sport of college basketball in how he tells his stories. I love his historical depth. This book has a couple moments of slowness but overall was very good. I respect his writing but wish he would avoid the little political jabs from time to time. I read his books to escape the daily grind and sometimes feel like he doesn't understand that or appreciate that enough. Overall, I highly recommend this book.

Although we were denied the enjoyment of March Madness this year, "The Back Roads to March" more than made up for it. John Feinstein is a skilled writer and storyteller. This book is as good as "Where Nobody Knows Your Name," by the same author. I hope we get the opportunity to hear John broadcast college basketball games next year!

For me it fell flat

I was disappointed in the lack of depth to this book. I was really looking forward to it especially since there is no NCAA basketball this Spring. For me it was really an extended sports article with a lot of filler of game by game results. This was more the backroads of the East Coast and NE US. Very little anywhere else. It did provide a great summery of the various coaching trees.

Such a great listen with no tourneys this year! Kept me in the spirit. Ku had great team this year but Kansas City is a great area for basketball through divisions 2 and 3 and home of NAIA national tournament! Thanks for backgrounds of coaches and teams. Love the little guys and underdogs. Made March for this former freshman and cyo coach enjoyable!!!