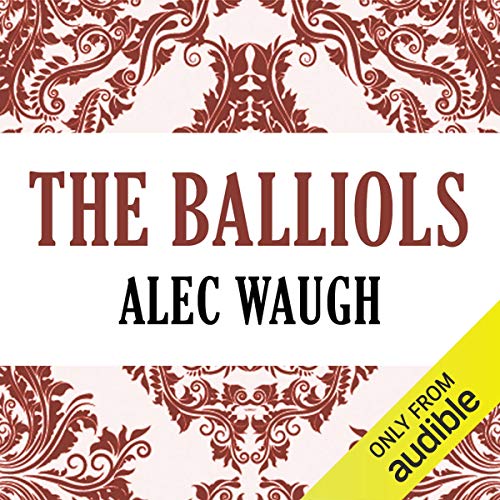 This audiobook tells the story of the Balliol family as they exist through the suffrage movement and the end of the Edwardian era to the Great War. The Balliol children are subject to the effects of the war - the harsh discipline and the subsequent laxness, the breakup of family loyalties, the post-war cynicism and, in the youngest child, the ultimate trend back to a sounder pattern of life.

The action of this audiobook, which is swift, continuous, and dramatic, develops side by side with the plot of its theme that "to build a sanctuary, you must destroy a sanctuary"; that the destruction to which these 30 years have been witness was an inevitable and necessary part of progress. Vigorously pursuing the fortunes of an English family during the most turbulently shifting period in history, The Balliols combines the feeling of Cavalcade with the powerful narrative flow of the Forsythe Saga.

Alec Waugh (1898-1981) was a British novelist born in London and educated at Sherborne Public School, Dorset. Waugh’s first novel, The Loom of Youth (1917), is a semi-autobiographical account of public-school life that caused some controversy at the time and led to his expulsion. Waugh was the only boy ever to be expelled from The Old Shirburnian Society.

Despite setting this record, Waugh went on to become the successful author of over 50 works, and lived in many exotic places throughout his life which later became the settings for some of his texts. He was also a noted wine connoisseur and campaigned to make the cocktail party a regular feature of 1920s social life.

Where does The Balliols rank among all the audiobooks you’ve listened to so far?

I always thought Evelyn Waugh was the most famous brother for a reason, but this has more depth to it than anything Evelyn wrote. Slow start, but once the story really gets going you can't stop listening. The narrator does a fine job discriminating between the many, many upper class English characters using great characterisation. Lots of Cockney soldiers in Hugh's section, and an inspired decision to make the WWI novelist and Hugh's friend a northerner.

What was one of the most memorable moments of The Balliols?

That would give too much of the story away.

I'll be reading more Alec Waugh from now on, and looking for more fiction read by this narrator.

I enjoyed the look at a changing culture, the ideas towards women/voting/marriage. It is too bad that the narrator, especially with his dialogue (think pompous pretentious voices for every character), distracts from the storytellling.

i could read this all day, lovely descriptive prose at each juncture. sad when it ended