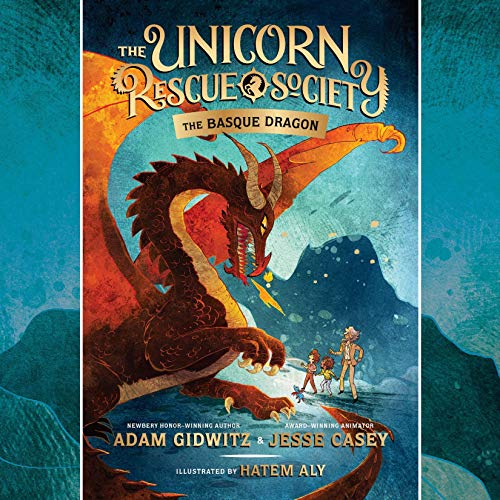 A globe-trotting new middle-grade fantasy-adventure series about mythical creatures and their cultures of origin, from the Newbery Honor-winning author of The Inquisitor's Tale.

Elliot and Uchenna have barely recovered from their first adventure with the Unicorn Rescue Society when the mysterious Professor Fauna approaches them with an all-new quest. And this time, they're going to have to cross the Atlantic Ocean to the Basque Country of Northern Spain. Elliot and Uchenna, with Jersey in tow, soon wonder whether their newest fire-breathing rescue might be more than they can handle. And why do the evil-doing Schmoke Brothers seem to be involved yet again?

This is the second title in Unicorn Rescue Society, an exciting and hilarious new series about friendship, adventure, and mythical creatures from around the world by Newbery Honor-winning author Adam Gidwitz teamed up with Mixtape Club founders Jesse Casey and Chris Smith, and Hatem Aly, illustrator of The Inquisitor's Tale.

Includes an exclusive bonus story about the medieval Secret Order of the Unicorn!

What listeners say about The Basque Dragon

My five year old loves to listen to this at bedtime. Again and again. I've never made it all the way through without falling sleep, but I do find it a nice age appropriate adventure. It's not irritatingly loud like some kids audiobooks.

not for young readers

inappropriate for kids, everytime the main character says he's uncomfortable being in a basement alone with an adult and they're not allowed to tell their parents all the red flags go off. there's another book in this series they talk about genitals.

My son enjoys this collection and the narrator does different voices for the characters which is really fun.

My six year old is loving this series!

This series was an unexpected adventure. We would recommend this to elementary age kids. We can't wait for the next book.