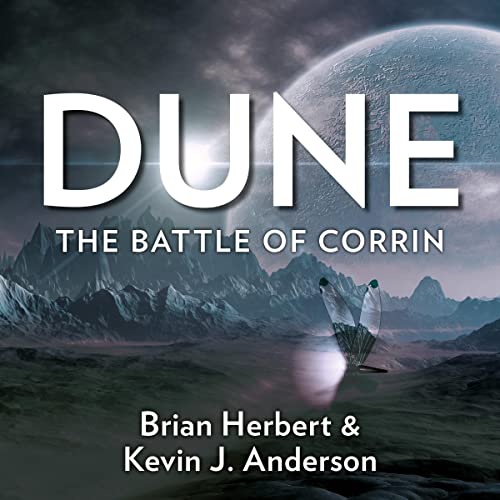 The Battle of Corrin

The authors of Prelude to Dune have written the triumphant climax to the history of the Dune universe: the story most eagerly anticipated by its listeners.

The universal computer mind Omnius has retreated to its last stronghold, where it plots a devastating new strategy that could undo the victories of the Butlerian Jihad. The surviving Titans are creating new lieutenants to do their will when at last they return to attack the human beings they once ruled. In the years of peace too many of mankind have forgotten that their machine enemies never sleep. But some have forgotten nothing - and learned from their triumphs. The brilliant military commander Vorian Atreides, son of a Titan, has the gift of long life from his terrifying father and knows the machines' minds better than any man alive. Norma Cenva, the genius inventor of humanity's best defences, dreams of new discoveries that will make man invincible. And on the windswept desert planet Arrakis, the power that can give them victory waits.

"If you're familiar with the Dune universe it is oddly compelling. This is a successful space opera that spins in a few genuine surprises." (Locus)

What listeners say about The Battle of Corrin