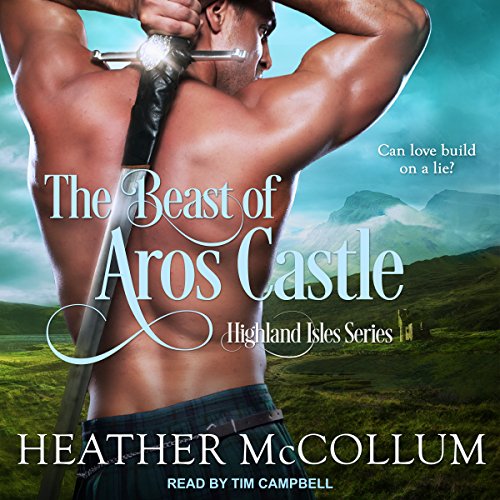 On the run from a dangerous man, Ava Sutton flees to the Isle of Mull off the coast of Scotland. Masquerading as a titled, English lady, Ava must convince the cynical and darkly handsome chief of the Macleans of Aros to wed her before the devil tracks her down.

Tor Maclean, the new chief of Aros Castle, has sworn off marriage after his first wife tricked him into it. Despite his efforts to scare away the Englishwoman, his father arranged for him to wed, Tor is drawn to her fire, courage, and beauty.

But when truths are revealed, and hearts as well as lives are on the dagger's edge, Tor doesn't know if he can forgive or if he will truly become the solitary Beast of Aros Castle....

What listeners say about The Beast of Aros Castle

The Beast of Aros

I loved this highland romance book & Tim Campbell is an excellent narrator! Characters were well developed & I can’t wait to read the next in the series.

The Beast of Aros Castle

Excellent collaboration between Heather McCollum and Tim Campbell. 💗 Heather makes the stories exciting, romantic and filled with non stop action. Tim Campbell uses his amazing vocal talents to bring the story to life. You feel like you've stepped back in time. Love the authenticity of the characters as well as the dialects. 5 Stars to author and Narrator. Don't miss this one!

This was definitely one of the best & most memorable stories I've read/heard and I've read quite a lot in this particular genre. I loved Tor & Ava's story and all the characters in it. I laughed, I cried, I sighed. Need I say more?

Wonderfully done! Narrator was superb and gifted characters. Will definitely look for more by Tim.

This was "beastly" good.

I'm So glad I found Heather McCollum. She writes witty, funny dialogue and her heroines aren't wimpy or saps. She reminds me of Julie Garwood's earlier highlander books like "The Secret"( one of my do not touch-favorites). And I can't leave out the narrator, Tim Campbell's performances were spot on. Definitely worth a credit. Enjoy!😄

This is first book by this Author and I am thoroughly impressed by her knack for storytelling. This book had me happy, sad, mad and best of all hot under the collar!!!

loved it. the story has lots of twists and turns, with just enuf live scenes to avoid being too boring. Tim Campbell is AWESOME.

Loved this story! The narrator did a great job too! I’m looking forward to the next book in the series.

Loved every minute of it. This is the 2nd time im listening to this series and im enjoying it as much as the first time. i finished it in a day. Tim Campbell is such a great narrator. I definitely recommend this book.

A must listen too book x

An amazing book with lots of twists and turns to it. Would definitely recommend to all x

loved this book! I can't wait to listen to the second book in the series!

I really enjoyed this story. I'm definitely moving on to the next in the series. The narrator also did well. 5/5