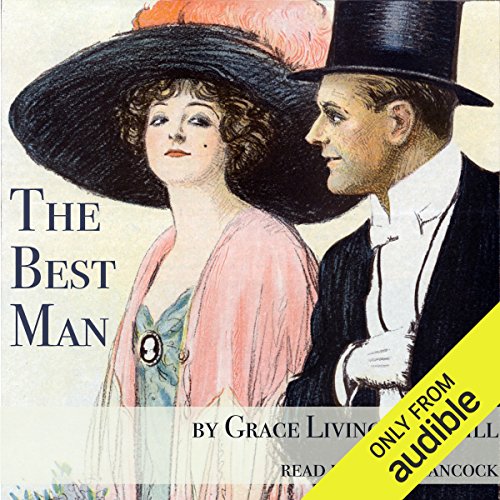 Cyril Gordon, an intrepid Secret Service Agent, has completed part of his mission in obtaining a coded message vital to the nation's security. But desperate men are pursuing him and with the help of a handy cab and a disguise, he makes his escape. The cab deposits him at a church where, astoundingly, everyone seems to be waiting for him to complete a wedding party, certain he's the missing best man. He reluctantly walks down the aisle, ever mindful of the men on his tail...until he reaches the altar to find that he's not the best man, but the groom! Soon Gordon's race to deliver his information safely is complicated by having a pretty new wife in tow who clearly has mistaken him for someone else!

What listeners say about The Best Man

Grace Livingston Hill wrote her stories more than a hundred years ago. They’re still fun to read because they’re about men and women falling in love, just as they always have and always will.
The Best Man is a classic. Hollywood made a movie, maybe two of them.
There are a few of her books recorded here at Audible but she wrote a couple of hundred, some better than the others. The better ones are written earlier in her life. Many of them are centered on Christianity, but not all of them.
I’ve emailed Audible about Hill’s books. They run the gamut, one star up to four, maybe four and a half. Half the books they’ve invested in are one star quality.
Here’s the thing; you’ve got to read them to determine which are best. They can think outside the box and conduct a survey of her readers for the opinions that matter.
I want the good ones now, because I’m not getting any younger.
The Gold Shoe is good. The Obsession of Victoria Gracen is a five star winner. Silver Wings, Spice Box, The Man of the Desert.....please take a little more time in your choices. It would be so appreciated.

This is an enjoyable story that drew me in completely. I particularly enjoyed the author's skillful, detailed description of what the characters were thinking. She illuminated the thoughts that pass so quickly through your mind that you don't realize you thought them, but the impressions stay with you. She made an extraordinary set of circumstances very believable. I highly recommend this book.

One of the best romantic stories I've listened to!

this story is fantastic. the characters really seem to come alive as you listen to it.

The mark of a true writer is making you feel make her characters are, Grace delivers on this beautifully.

Best Man is one of Grace's better stories and can be enjoyed by about anyone.

I love Grace Livingston Hill books. She was a true romance writer who kept her books clean and Godly.

I've loved Grace Livingston Hill's books for years since I was a teenager and at age 81 they still intrigue me with mystery, romance and excitement.

Another wonderful story by Ms. Hill. I have been a big fan of hers since I was a young woman. I like the clear clean writing without all of the bad language use by many writers.

Loved this book. I'll probably read it all the time. It keeps you guessing, yet gets to the point in a classy way.

Ridiculous but rather sweet

Completely ridiculous storyline but it’s rather a sweet story for all of that. And unlike many Livingston Hill books it’s not loaded with religious zeal.