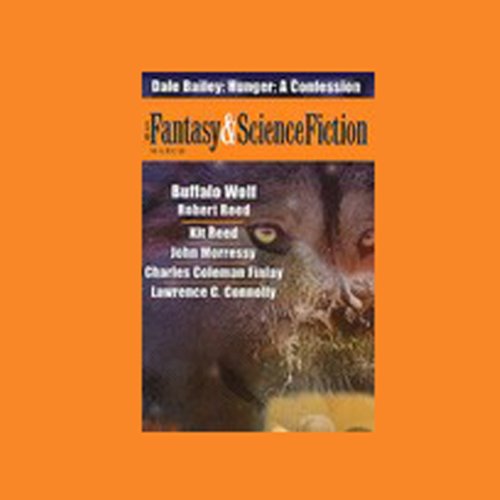 From the start, with John Morressy's "The Resurrections of Fortunato," we are transported into the mind of an alternative Edgar Allan Poe in a highly evocative new take on The Cask of Amontillado.

In "Decanting Oblivion," Lawrence C. Connolly takes us on a ride into a barely futuristic, but totally harrowing, downtown Pittsburgh with messenger extraordinaire, Nix. There's no question that this one will keep you up all night.

Aaron A. Reed's "Shutdown/Retrovival" explores the ever-shifting worlds of virtuality and the social consequences of interactive gaming in a fast-paced imagistic tour-de-force.

"Hunger: A Confession" by Dale Bailey is a haunted house story in the tradition of campfire spookings - but creepier than any you've heard before (especially as narrated by Harlan Ellison).

Part romance and part myth, Gary Shockley's "The Lightning Bug Wars" is a long slow raft trip down a river of nightmares, where the catfish is lurking and time has no meaning.

And finally, in "Seeing is Believing," Paul Di Filippo applies science to bank robbery in a tongue-in-cheek caper story that will at once amuse and intrigue.

What listeners say about The Best of Fantasy and Science Fiction Magazine, March-April 2003

A bit slow at first, but a few wonderful treats

As a long time fan of f&sf magizine, I found this recording to be typical of the magazine itself.

The first story "The Resurrections of Fortunato," will be hauntingly familiar to any reader of the Poe story, essentially taking the same story, but switching the characters and adding to the plot at the end. However for those unfamiliar with Poe, this work with be a sure treat.

I found the second story, "Decanting Oblivion," to be droll, and rather drawn out for what it was, and somewhat confusing in the telling. This was the only story in the collection I did not enjoy listening to.

"Shutdown/Retrovival," the 3rd story, was a twist on the movie The Matrix, in what I thought was a rather ingenious way. I really enjoyed the telling as well, and the imagination used by the author. If you like the idea behind the Matrix, you will like this story.

"Hunger: A Confession," was possibly the best story in the entire collection. With a great reader, a fast moving plot, and a very spooky ending. Highly recommended for horror fans!

"The Lightning Bug Wars" was a bit slow moving at times, but all in all good.

"Seeing is Believing," was a fairly neat little story that was worth the listen.

In summary, I highly recommend this Audible selection to anyone who normally enjoys Fanstasy and Science Fiction magazine. I also think it would be enjoyable to anyone who loves horror, fantasy, or thrillers. Just don't give up on it at first, because the stories get better as they go along, with each story seeming better than the last.

A new dimension for F&SF

I've been reading The Magazine of Fantasy & Science Fiction since the mid-1960s and listening to these 2003 stories on my tiny solid state computer while on my afternoon walks is truly a science fictional experience. The reading performances were excellent and made the stories vivid and three dimensional. I had only read "The Lightning Bug Wars" before listening to this collection -- I can't find time to read like I used to, so Audible has helped finish another five stories from these issues and I'm very grateful. If Audible offered complete monthly issues I'd be able to "read" F&SF from cover-to-cover.

I enjoyed every story, each distinctively different, colorful and dramatic. Short stories work perfectly for walks because I can finish them in one or two outings. I've gotten all the F&SF issues that Audible has offered so far and have loved the diversity of stories.

When I read my monthly F&SF I often start stories and don't finish them. I didn't skip over any of these audio stories and enjoyed them all. Listening helps me get into each story way better than reading. Hearing these stories captures my attention with ease that reading often fails to do.

I love all things science fiction but I couldn't even make it through one of the stories. If you haven't read hitchhikers guide to the universe (I just did) and I'm sure I starte at many different locations and it didn't matter so do that instead!