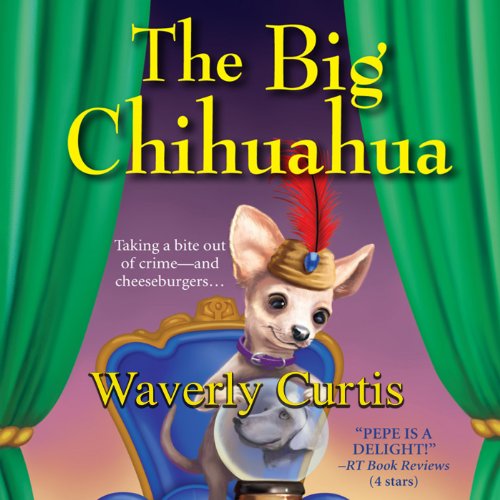 P.I. Geri Sullivan and her talking Chihuahua, Pepe, are always hungry to sink their teeth into a new case. So if helping a hapless husband win back his wayward wife means sneaking into a cult of dog-worshippers, porque no?

Inside the believers' rural retreat, Pepe perks up his ears when the charismatic leader pegs him as the next incarnation of the spirit Dogawanda. But the discovery of a body, murdered between mantras, suggests there's more chicanery than channeling going on in this suspicious sect. While wild wolves howl, a killer is on the prowl - and it's up to Geri and her canine compadre to dig up the dirt.

What listeners say about The Big Chihuahua

Pepe Is My Hero!

I love little Pepe! He is muy macho! I look forward to listening to his stories. Please keep the books coming.

This was another charming book about a little dog with a big attitude & big crime adventures in helping his P.I. in training partner solve another crime. I really like this series & can hardly wait for the next one to come out. Pepe is the real “star of the show”. So I guess I’ll have to keep watching for the next in this series to get my Pepe fix again.

Geri and Prep at Work Again

Firstly, Laura Farrell once again brings Prep to life, giving the listener many opportunities to laugh at his ferocity. Although this is the second in the series, it nevertheless stands as a complete package. It amazes me to see how well Waverly Curtis captures the embodiment of CHIHUAHUA. If you know one of these wonderfully large dogs (in a small body) you will know what I mean! Can't wait to see what mischief recalls this duo in the the next segment.

I always enjoy the adventures of the talking chihuahua. The narrator is very good but she doesn't know how to pronounce chihuahua.