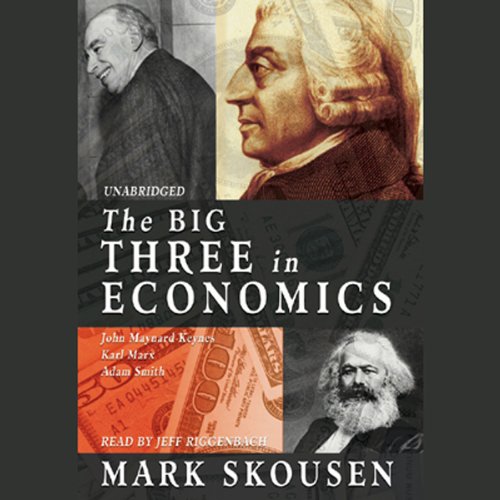 The Big Three in Economics

The Big Three in Economics reveals the battle of ideas among the three most influential economists in world history: Adam Smith, representing laissez faire; Karl Marx, reflecting the radical socialist model; and John Maynard Keynes, symbolizing big government and the welfare state. History comes alive in this fascinating story of opposing views that continue to play a fundamental role in today's politics and economics.

In the 21st century, Adam Smith's "invisible hand" model has gained the upper hand, and capitalism has ultimately won the ideological battle over socialism and interventionism. But even in the era of globalization and privatization, Keynesian and Marxist ideas continue to play a significant role in economic policy in the public and private sectors.

"Thoughtful, acutely observed and profoundly moving....Barker mixes brilliantly observed contemporary realism and mystical overtones with dazzling skill. The book has the grip of a superior thriller while introducing, with no sense of strain, a sense of sorrowful mortality that lingers long after the last page." (Publishers Weekly)

This book is ok. Unfortunately it is pretty much a "cut and paste" book assembeled from his earlier works. Instead of this one, buy "The history of modern economics" by the same author.

If you listened to Skousen's Making of Modern Economics then there really is no reason to pick up this volume. There are whole passages lifted from the prior text and this volume offeres really no new insight. This is more of an abridged version of his earlier volume. There is a lot of really good theory in this book and perhaps a little more focused that the purposely broader volume published earlier. I recommend it for someone who just wants the major thinkers instead of the progression of economic though.

Quality economic intro, but not without bias

This was my first book about pure economics (vs. economic history) and I learned a tremendous amount. Skousen takes a circumspect approach to each school of thought, briefly addressing the biography of each character and then describing his ideas and their ramifications.

It's worth pointing out that book is really about the big 3 schools of thought, rather than just the central personalities of the "Big Three". Skousen addresses the primary evangelists of each school who followed the three greats as well. Overall, his coverage of the topic felt thorough as he deftly switches between history, the nuts of bolts of each theory, and the effects of each.

One word of caution, however. I expected this book to be more "Just the facts, Ma'am" as it discussed each school of thought, leaving true evaluation of the theories up to the reader. However Skousen's neo-classical bent comes through almost immediately. His opinion is well-reasoned and I found myself agreeing with it almost unanimously, but the title left me expecting something slightly different than what the book delivered, which made it a 4-star overall.

The reading didn't detract from the text. Hey, we're talking economic theory, right? How much do you expect with regards to dramatic reading?

A great introduction into the history of economics

I fairly don't understand people who complain this book is biased. So what? The bias is easily distinguishable and it doesn't compromise the facts presented in the book. You don't need to convert yourself in to a free market economist to learn a bit of the history. At worst, you would know one biased point and it'd give you an even better perspective while reading a different point of view on the same economists or events.

As the author noted, it is important to try to avoid discrediting all of the person's work just because his or her major theory was proven or considered false (he was talking about Marx, btw). Thus if you disagree with the author on some major grounds, I think it's always a good exercise to try to find things that you agree with and can make use of.

Good book, great narration. Giving four stars because the story may have been a bit monotonous at times.

The author does not disseminate without subjectively adding personal opinions instead giving you his ranking and pushing you toward his view. You yourself should be the person to contemplate and adopt a model.

I don't agree with but appreciated this book

I am definitely not a Marx fan, but I felt that this author is a bit too conservative for my taste. Yet, I actually appreciated the way he explained, summarized, and contrasted these three men's ideas. The reality is that, I think, these three men's ideas were shaped by the political and social environment of the times each experienced as well as by their social backgrounds. I recently read (listened to) both Adam Smith's The Wealth of Nations and Joseph Stiglitz's The Price of Inequality and was amazed by how the world has changed between 1776 and 2012. I would not be surprised if Smith were alive now as an economist, he would have agreed with Stiglitz's viewpoint (though I am positive that the author of this book would not agree with me!). Anyway, I enjoyed listening to this book.

The book spends most of it's time attacking socialist ideas in a personal way. I thought it would focus more on the theories, and it did so more at the end, but it also spends a vast amount of time on the lives of Smith and Marx. When speaking of capitalism the author uses definitive wording such as; "he rightly concluded". In contrast any idea with a socialistic view he would use terms such as; "misguided". I obviously understand there will be biases in all works, however, as an economic centered book I had assumed there would be an objective stance. I would like to say it was a good view on their personal lives, but with such heavy subjectivity, I'm uncertain of the accuracy of the events laid out by the author.

What you really need to know

That is what is in this book and I loved it. You can't go wrong if you buy this book.

The text was a bit dry. Good topical information.

This would have been much better if it had been a more balanced book. It is definitely in the free market + religion + tea party ballpark. If that's your inclination then you'll like it. But if you want an objective and balanced view of economics ... definitely pick another book than this.

Acceptable but rather partisan coverage

This title includes short biographies of each of the three economists Smith, Marx and Keynes, together with a discussion of the main points of their work and critique of their ideas. It also goes into useful detail about their successors and their historical impact.

Serves as a reasonable introduction to the history of economics for the general reader. There is bias introduced by the author's particular perspective. For example, he devotes a surprising amount of space to a discussion of whether or not Adam Smith was a practicing Christian. The description of Karl Marx is splendidly bitchy: a man described more than once as 'demonic'. He is villified, for example, because his children died in poverty. However, much of the discussion of Marx' work is reasonably unbiased and can be useful. It is obviously a matter of great dismay to the author that John Maynard Keynes described himself as an 'immoralist' and was openly homosexual for part of his life.

A reasonably good read, less impartial than I would have liked, but presents the main economic ideas in an accessible manner.

Not impressed with this title at all - overly simplistic, historically inaccurate and written in small chunks - pretty much like a students' set of notes from lectures. Not for anyone interested in Economics or the economists in question. I would highly recommend Thomas Sowell's basic economics as it covers the essential points in a far more intelligent & lucid way

An ode to Adam Smith

I was terribly disappointed by this book. I had in mind an objective and analytical account of each economists contribution to the field; this is not the case. The author favours Adam Smith above all and is sure to push his opinion at every opportunity.

At least pretend to hide your bias

Narration was good. Great all round introduction to economics. Highly recommend. A great book if you want to understand economic basics and principles or a fantastic starter for further study.

it is performed in the best manner possible. the book itself is good for acquiring general knowledge. it helps to have a somehow clearer understanding of economics in general but there are not too many details .

What would have made The Big Three in Economics better?

Less of the biased opinions of the writer , and more objectivity

Has The Big Three in Economics put you off other books in this genre?

No, I am aware not eveyone is so pro capitalism and so biased towards anything else.

Who might you have cast as narrator instead of Jeff Riggenbach?

Annoyance and urge to delete this audio book

Very pro capitalism and very biased towards it. Definitely very un-objective read, unlucky with my choice of book.

I enjoyed it and learnt a lot but I did feel it could be better if stayed neutral by avoiding cheap jibes at Marx.

propoganda recorded with a tin can

Upon listening to this for 30 minutes anyone with any knowledge of these 3 economists will realise how ridiculous this account is. the book is made purely to promote some kind of specifically American form of Neoliberalism with strong religious undertones, this is especially obvious to anyone who is not an American.

Buy this book if you just wanna hear how amazing free markets and laissez faire economics are and what a righteous genius Adam Smith was and hear Karl Marx called 'possessed by evil' and 'responsible for more suffering than any human who ever lived'. This book is neither unbiased or objective and conveniently overlooks the millions who have died due to Chicago school free market neo liberalism in South America, Africa and the Middle East

As someone who has not read any of the author's prior books, I found this worthwhile. However, the author's biases come through, and are manifest in overly simplistic assertions. For example, questions about whether investment or consumption are better for economic growth, in my mind, border on idiocy. Clearly both C and I have to form a proporton of GDP in a healthy economy. If there is no C then clearly there is no capacity for I. After all, if the purpose of I is not to enlarge C, then what is its purpose? And if C is too small, then its enlargement will require very little I.

It's high time economists removed the entanglements of Left vs Right ideology.