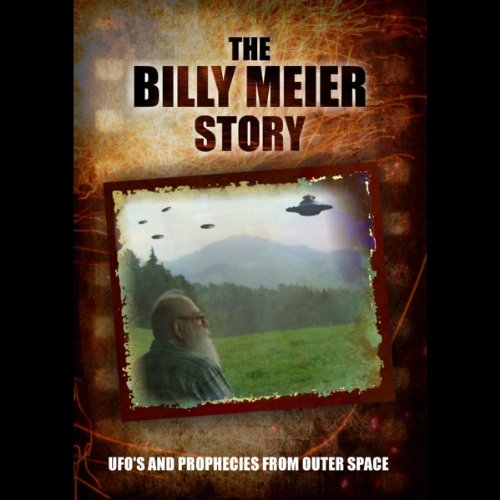 In 1958, Billy Meier predicted the Iraq War, AIDS, and global warming. Is it the biggest hoax or... the most important story in human history? You'll find the startling answer in this remarkable, true-life story about how a young Swiss boy's meetings with extraterrestrials would eventually lead him later in life through dozens of countries, meeting many famous world leaders - including Saddam Hussein - in order to fulfill ancient prophecies.

This one-armed farmer from Switzerland has taken hundreds of the most startling photos in UFO history and has even filmed what he refers to as "Beam Ships" used by sentient beings that hail from a star system near the Pleiades. He has been able to produce photographs, film footage, sound recordings and even metal samples as evidence of his visitations

You'll be captivated by how, in his 20s, "Billy" Eduard Albert Meier was transformed into "The Phantom" (a real life combination of Indiana Jones, Lawrence of Arabia, and Han Solo) and by packing a .44 Magnum was able to apprehend serial killers and mass murderers. Meier's life story is an enigmatic journey that ultimately culminates with him becoming the messenger for an advanced race of beings know as the Plejaran. Their message is clear: earth is in trouble, the people have been asleep, and we must make drastic changes or there will be devastating consequences for all of mankind.

I was interested in the biography of Billy Meier, but what I got was disjointed audio of Mr.Meier in German language quasi translated into English with Michael Horn inserting commentary at will.

This misses the mark of any attempt to try and put together exactly what happened to Meier growing up in the presence of ET's from childhood to adulthood and the scientific discoveries that he was supposed to have gained from ET's.

I was totally confused and the audio seems as if Horn did this at his home studio.

I tried hard to listen two or three times same result confusion and disappointment to really carry the info about Mr. Meier. I hope for a remake of this in coherent form.

you can get the free video on you tube

It's too short.Plus it is available online for free.One needs to see theses aliens and spacecraft oneself to really believe it.It could be a organized hoax .I believe the raelians say the same thing but use a different name.more Explanations are needed because there is allot on the Internet out there.Like who are the tall whites?

Seeing with and without eye sight is the proof positive that something is real. touch, smell and sound enhances yor truth. To lie is an attempt to destroy the truth. This is a clear example of why we should NEVER interfere with life's truth!

Please open your mind and check this out

This is the truth people time to wake up.
You can't prove this wrong in any way shape or form

Per this book Meirs contact /teachings going on for over 50 years. Our world leaders are so frightening and shallow minded. Wish they all could get together and review Meirs story and meet collectively with pleadian beings.

Not a Book but a Recording

Did The Billy Meier Story inspire you to do anything?

I love the Billy Meier story a lot. However this was not a book at all. It's simply a recording of excerpts from a movie documentary that i found onYoutube anyway. I was expecting his BOOK.

Sounds As Though It Should Be a Soundtrack

While the information presented will lead me to investigate more about Billy Meier, this particular presentation sounds as though it was the soundtrack to a video, without the benefit of the visuals. If I were asked for a recommendation, I'd suggest anyone interested look for the video or actual books about the character.

Get the video - do not get this

I am highly interested in this story, the quality is fine in my opinion, however I would highly recommend getting the video for this audiobook. There are parts in it I wish you could look at what they are describing. I would recommend getting the DVD or video version for this audiobook. This video is also available on youtube for free at the moment. 3 stars because the information has to have pictures and/or videos with it, but even just the audio itself is interesting.

Wish there was more

I very much enjoyed listen to this book, I heard of Billy Meier through the George Noory show and had to listen. I'm a bit confused about the layout of the chapters after the first, however I listened to them anyway.

The only genuine UFO contact of the 20th/21st century. Micheal horn has the most information on this man...look him up.