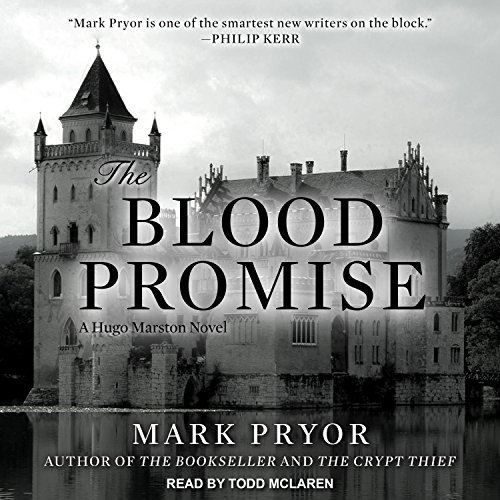 In post-revolution Paris, an old man signs a letter in blood, then hides it in a secret compartment in a sailor's chest. A messenger arrives to transport the chest and its hidden contents, but then the plague strikes and an untimely death changes history. Two hundred years later, Hugo Marston is safeguarding an unpredictable but popular senator who is in Paris negotiating a France/US dispute. The talks, held at a country chateau, collapse when the senator accuses someone of breaking into his room. Theft becomes the least of Hugo's concerns when someone discovers a sailor's chest and the secrets hidden within, and decides that the power and money they promise are worth killing for. But when the darkness of history is unleashed, even the most ruthless and cunning are powerless to control it.

I enjoy this narrator, with the exception of one glaring flaw: HIS FRENCH IS TERRIBLE! For a series set in Paris, this is inexcusable. Don't you at least have native speakers to coach your narrators in correct pronunciation?

This one was a bit difficult for me to follow. The pronunciation of the French character names and placement in context confused me. Guess I should've taken notes. That's the one disadvantage of listening rather than reading the book. Still I enjoyed the story.

And a great story though I did figure out what was going on a few chapters before the end. Thoroughly enjoyed it.