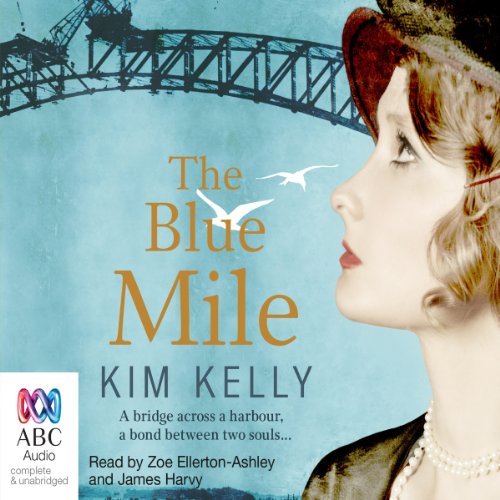 The week before Christmas, 1929, Eoghan O'Keenan loses his factory job, and has to flee the slums of Chippendale with his seven-year-old sister Agnes. On the north side of Sydney at Lavender Bay, Olivia Greene is working on her latest millinery creations and dreaming of becoming the next Coco Chanel.

A job on the Harbour Bridge for Eoghan, designing couture for the Governor's wife for Olivia, and a chance meeting in the Botanic Gardens sees the beginning of an unconventional romance. From vastly different backgrounds, with absolutely nothing in common - from faith to wealth and class - it seems that the blue mile of harbour between Olivia and Eoghan will be the least of the obstacles ahead.

By mid-1932, as the construction of the Bridge is completed, the city is in chaos as the Great Depression begins to bite hard and the unemployed edge ever closer to a violent revolt. And then Eoghan disappears.

Set against the spectacular backdrop of Sydney Harbour, The Blue Mile is a tale of the both wild and calculated risks a city took to build a wonder of the world, and of those taken by ordinary people to save a great love, against all of the odds.

What listeners say about The Blue Mile

Would you listen to The Blue Mile again? Why?

Definitely! I have always been fascinated by the Great Depression, what people did to survive, the hope in the hopeless shanty towns, picking up and starting again. But I was never made aware of Australia's own history at that time. Throw in a terrific performance, a beautiful complex love story, and the urgency it all evokes... this is a fantastic novel.

Which character – as performed by Zoe Ellerton-Ashley and James Harvy – was your favorite?

Both narrators embodied their characters - Harvy depicted Eoghan's desperation, his hope, his love; Ellerton-Ashley was whimsical and somewhat flighty and over-dramatic, which were all required by Olivia's character. I want more from both these narrators; unfortunately, at this time, Audible does not have further offerings from either of them.

No distance too Far

Using the bridge as a symbol to cross the distance in class, social standing, religion between Olivia and Eoghan... beautiful depiction! From the opening scene where Eoghan is fired from his job and goes home drunk, hoping that his father won't be there to tan him for getting sacked... to the completion of the bridge's construction and the resulting joblessness and hopelessness... this is a beautiful, emotional snapshot of a time and place unknown to me.
Perhaps it ends a bit too neatly, but no other time period could have made it all work. The ending might have made me give the book 4 stars, but I loved the book too much for that. I plan on reading Kim Kelly's other novels soon!

I went down the rabbit hole of googling about the building of the Sydney Harbour bridge because of this book and I think Kim Kelly captured the time period wonderfully. The politics of the period are truly fascinating and this book really brought to light the very real class differences that existed during this period where so many people had no jobs or homes. Wonderful narration as well.

Nice wholesome story line .
Love Australian settings in Old town Sydney.
Wish I lived there.
A lovely read for anyone.