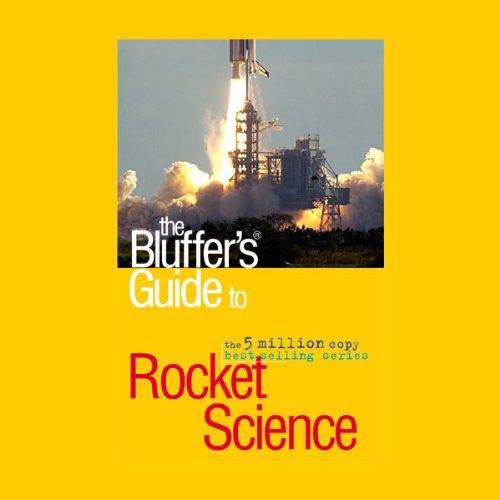 The Bluffer's Guide® to Rocket Science

Be an instant expert on Rocket Science and Bluff Your Way® with explosive effect. No primer required, just a sense of humour. From 'weightlessness' to 'wild rockets', and from 'space shuttle' to 'shock diamonds', here's everything you need to know to ignite any conversation.

Blown opportunities
Many more millionaires have gone bankrupt trying to develop rockets than satellites. They have overlooked the fact that the operative word in "controlled explosion" is controlled.

Gravity depravity
Nobody knows what gravity really is, so don't blow your bluffing cover by trying to explain it. The only thing known for certain is that any two physical bodies will attract each other in proportion to their sizes (which fact is best not taken literally by oddly sorted couples).

Lunartrick
One Sunday afternoon, the 12-year-old von Braun strapped rockets to a cart, lit the fuse, and sent the fire-spitting vehicle careening down a street .... His life-long aim was to send a rocket to the Moon. It doesn't take a rocket scientist to figure out that flying a lunar mission is tricky.

"Bluffer's Guides are a quick read and chock full of the basic information on any subject that's needed to pass yourself off as knowledgeable." (Toronto Globe and Mail)

What listeners say about The Bluffer's Guide® to Rocket Science

Good for the right person

The book is only meant for the audience that knows very little about rockets, with a tongue in cheek delivery.

There is a bit of science here, but this is mostly history and jargon.
Interesting and entertaining. I picked this up during one of the sales and it was a steal.