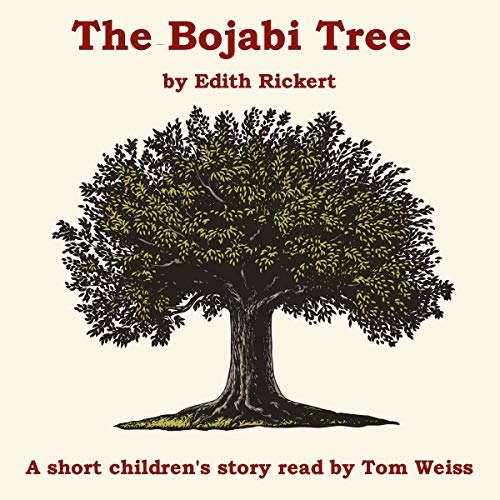 The Bojabi Tree is a version of a traditional West African story. Scarce rainfall has hit the African plains. Animals are becoming more and more desperate to find something to eat when they happen upon an amazing tree with enticing fruit. The problem is that they don’t know the name of the tree and if the fruit is safe to eat. The starving animals decide to send messengers to King Leo, the king of the beasts, to learn the name of the tree. But each messenger returns having forgotten the name of the tree. A tortoise named Tommy volunteers to visit King Leo but the starving animals do not believe he can accomplish the task where the other messengers have failed. Like many worthy children’s animal stories, there is a moral and a lesson to be learned.

A few words about the author, Edith Rickert. While not well-known, Ms. Rickert was a brilliantly intelligent woman with immense literary and cryptographical talents. The reason she was not well-known was that she was a strong woman in an era where strong women were not allowed to exist without the aid of a male counterpart. After spending time in Europe, she returned to the United States and worked as a writer in Boston for a few years. She then moved to Washington DC to work as a cryptographer for the government during World War I. She would later become an influential medieval scholar at the University of Chicago.

What listeners say about The Bojabi Tree